Juvenile sharks have been in the news lately thanks to some fine work by OCEARCH, who found and tagged nine juvenile white sharks off of Long Island, confirming the area as a white shark nursery.  While this was happening, I was also out on the water looking for juvenile sharks with support from the Smithsonian Environmental Research Center‘s Fish and Invertebrate Ecology lab and help from some people from SERC and the North Carolina Aquariums.  Instead of plying the waters off of New York, we were off of the least-populated part of North Carolina’s Inner Banks, where the Pamlico Sound meets the mainland.  Our goal was to confirm sightings and catches of juvenile bull sharks in the area and find out where these future apex predators might go or come from using acoustic tagging and genetic analysis. 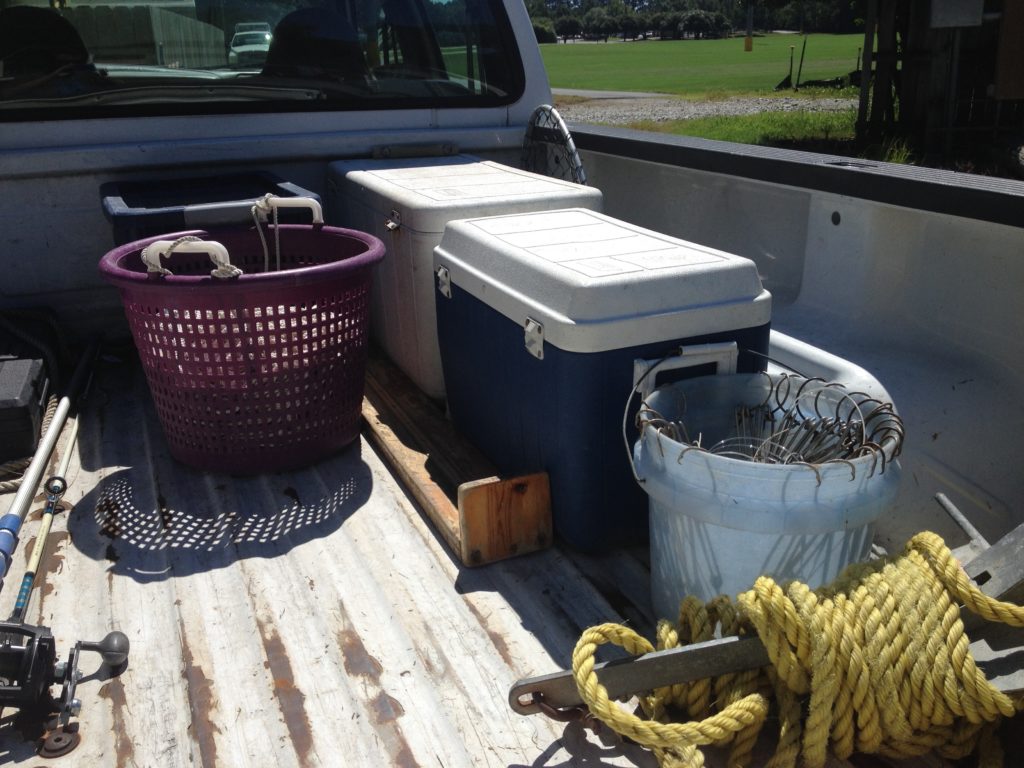 The longline gear sees the light of day for the first time since the end of last year’s field season in October.

After getting ourselves together, we drove 50 minutes through the Alligator River Wildlife Refuge to launch the boat at the nearest town, the tiny fishing village of Engelhard.  We would spend the next three days on the water from 3 pm to 10 pm, trying to maximize our chances of catching a shark by setting during the crepuscular period (or “twilight” for those who don’t want to use long technical terms).  We primarily used longline sets consisting of 24-26 hooks baited with Atlantic menhaden or herring to target sharks, figuring that gillnets would 1.) be too stressful on the sharks to leave them in good enough shape for tagging, and 2.) have a greater potential for bycatch, which in this area could include alligators and snakes.  Longline deployment was limited to 30 minutes to minimize the chance of any hooked sharks getting over-stressed in the gear.  I also brought along a fishing rod in case any “bonus sharks” were available during soak time. 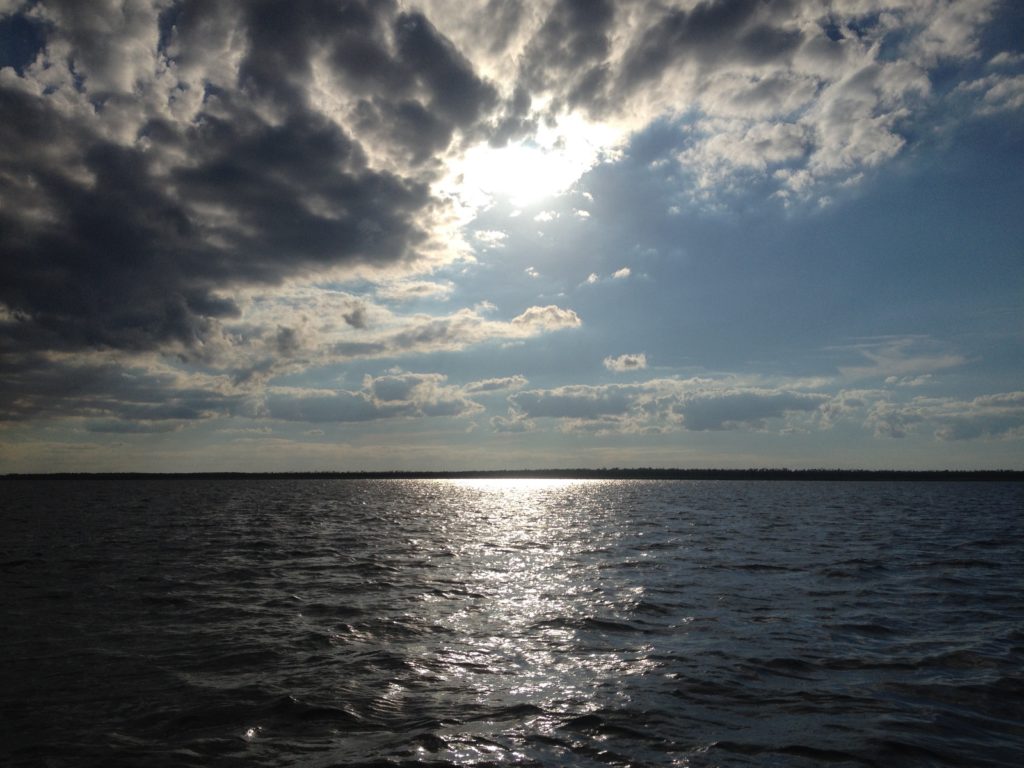 It may be the middle of nowhere, but it sure is pretty.

The waters of the Inner Banks are considerably less salty than the ocean or the sound waters just within the inlets, so any sharks present were likely to be freshwater-tolerant bull sharks.  We would spend the next two days looking for these sharks and mostly finding two species of ray: the Atlantic stingray and the cownose ray.  Both of these rays can tolerate low salinities and even make quick trips into freshwater, but otherwise are quite different ecologically.  The Atlantic stingray is very much a homebody, staying within the same creeks or embayments for entire seasons, while the cownose ray is well-known for gathering in massive groups and undertaking long-distance migrations.  The cownose ray is also famous for supposedly eating enough scallops to crash North Carolina’s fishery, but more recent research has exonerated them. 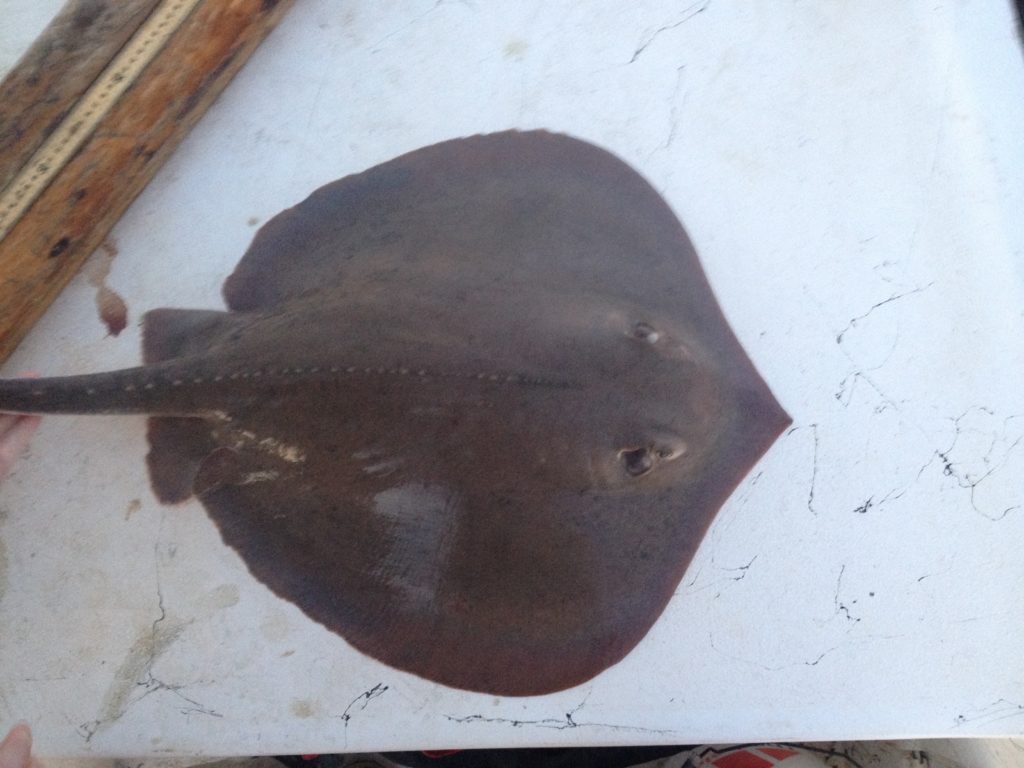 Atlantic stingrays are a common sight in the sounds of North Carolina. Just because you’re swimming inside the estuary doesn’t mean you shouldn’t do the stingray shuffle. 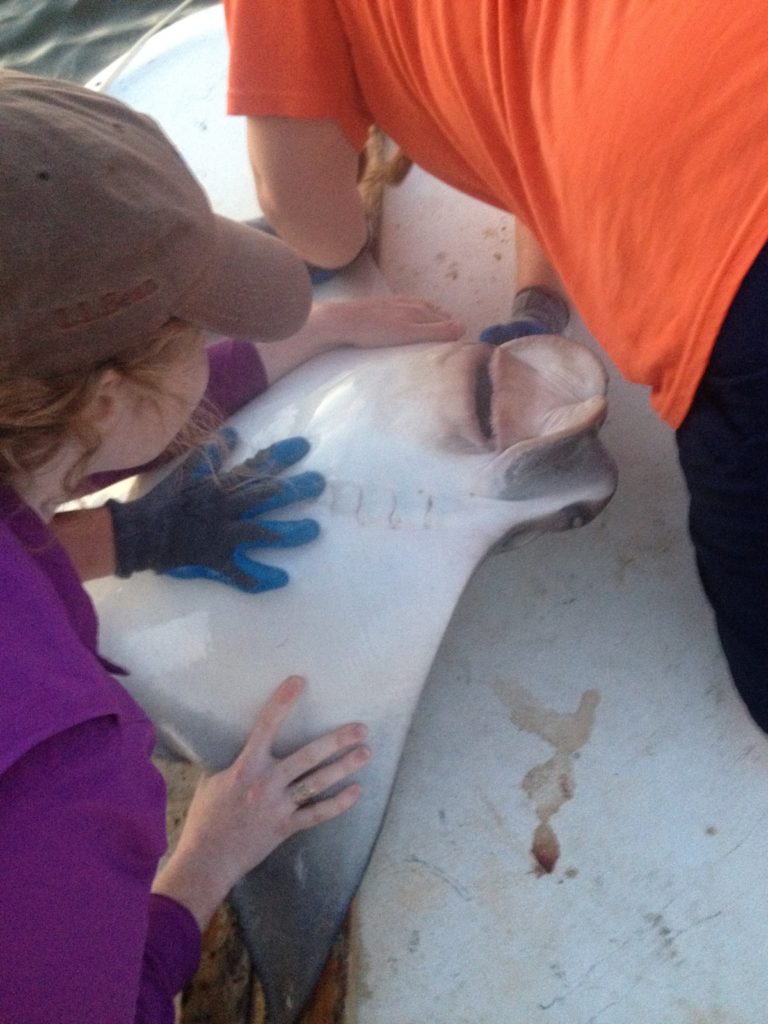 The cownose rays we encountered were some of the largest I’ve seen. It took two people to hold this one down and her wingspan was almost wider than the juvenile shark-sized fish board.

While getting data on rays is all well and good, they weren’t the bull sharks we were looking for.  Remembering some tips from shark fishermen in the Cape Lookout area, we decided to set on a shoal near a group of shrimp trawlers.  Sharks tend to follow trawl boats to opportunistically snack on bottom fish disturbed out of their hiding places by the net or any bycatch thrown overboard after the shrimp are sorted out.  Sure enough, the set brought up a cute little bull shark that was not only a juvenile, but appeared to be a neonate (likely born less than a month ago).  We brought him up, named him Paul (after a former assistant director at the NC Aquarium at Fort Fisher who loved bull sharks), surgically implanted an acoustic tag in him, took a fin clip for genetic analysis, and made sure he was ready to swim on his own before releasing him.  Some unexpected swells made the release a little more epic than necessary, but Paul swam off strongly. 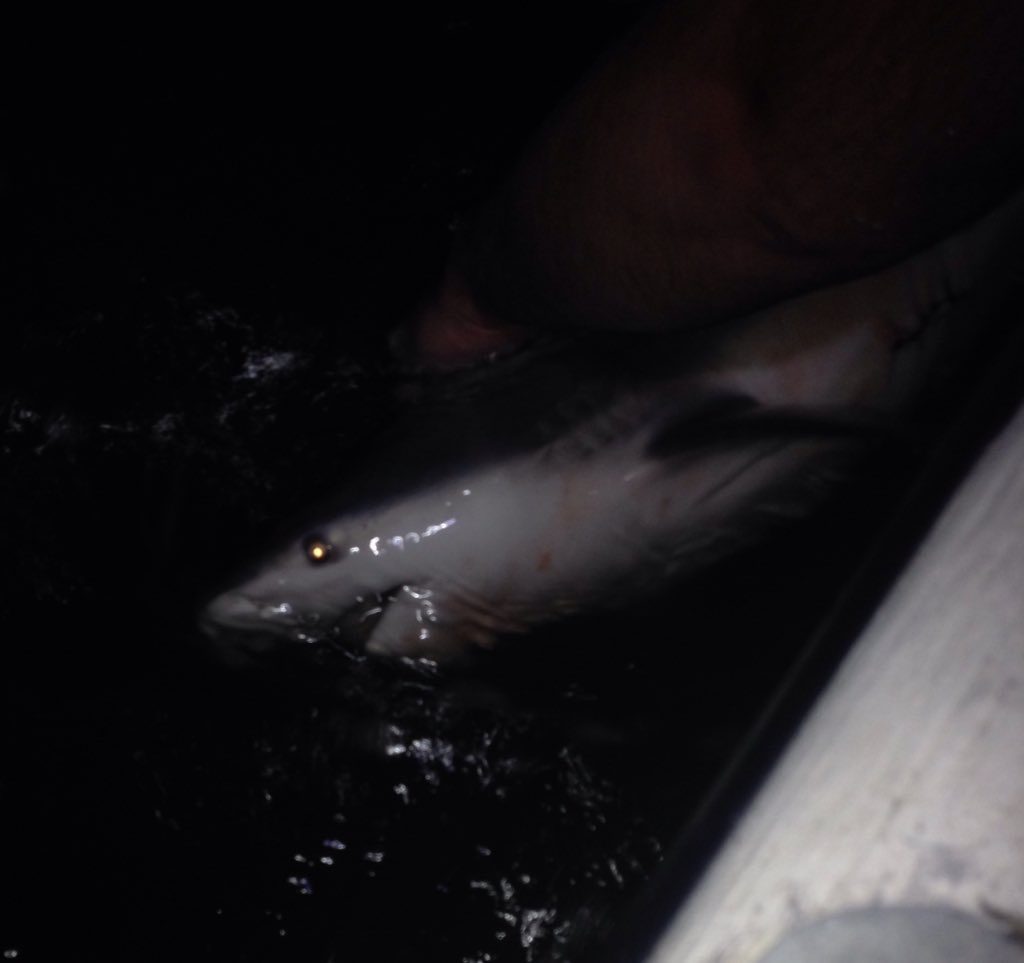 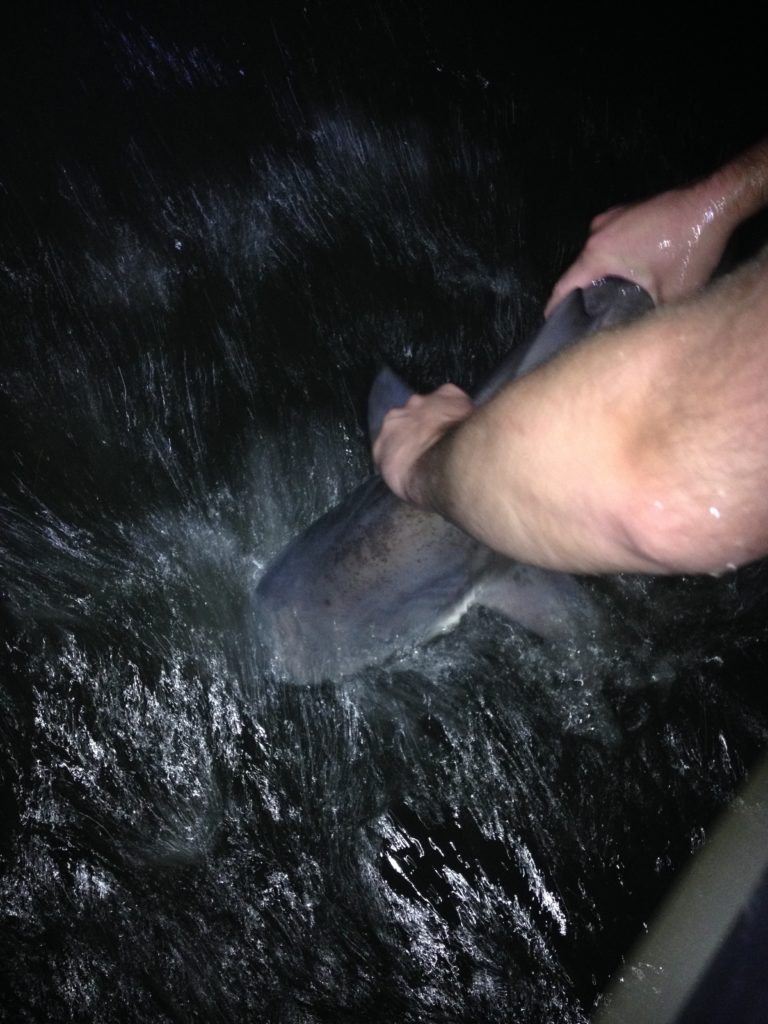 Paul rides the waves as we make sure he’s ready to swim on his own after surgery. Photo by Kimberly Richie.

To my knowledge, Paul is the first juvenile bull shark tagged with an acoustic transmitter in North Carolina waters.  With any luck we’ll get some tag detections from him soon, which will tell us which parts of Pamlico Sound he likes to hang out in and, as the weather cools, where he goes to overwinter.  The genetic sample will tell us which Atlantic bull shark population Paul may belong to and ultimately where the baby bull sharks of Pamlico Sound come from.  In any case, we’ve now personally verified the presence of neonate bull sharks in this estuary, which is pretty good evidence that a pupping ground is nearby (likely also somewhere along the Inner Banks).  We plan to be back next summer to see if we can find more of Paul’s conspecifics (and maybe even their parents), hopefully with help from data provided by Paul.