Animal Planet has an article up called the Top 10 Most Endangered Fish Species, which is a pretty good light read and gets most of its facts straight.  It gets kudos for having some species that don’t normally make this sort of list, such as the Acadian redfish and Boccacio rockfish.  However, there is one species on this list that is not only surprising in its inclusion, but shocking (literally, as you’ll see) in its inaccuracies. 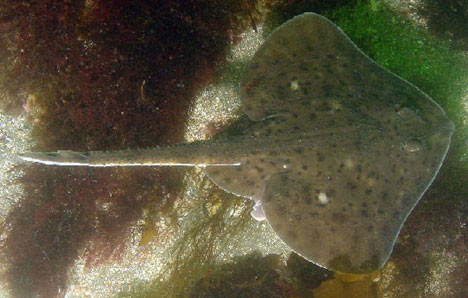 According to the article, the sixth most endangered fish on the planet is the winter skate.  These close cousins of stingrays are among the largest and most abundant skate species in U.S. waters.  They do show the long-lived, slow-growing life history typical of elasmobranchs, and are subject to some fishing pressure.  That said, any evidence of overfishing on this species is preliminary at best.  However, while there may indeed be some recent evidence of overfishing on this species, there is one thing the article gets completely and utterly wrong.

This is a direct quote from the article: “The winter skate is a fascinating species known to deter predators and stun prey with a quick jolt of electricity.”  Wow.  Come on guys, aren’t you the same people who put out Shark Week?

It seems to me that the “winter skate” described in this article is actually a mash-up of two completely different species.  First off, for the endangered aspect, here’s the barndoor skate: 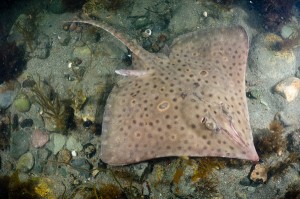 Barndoor skaters are actually much larger than winter skates, and are in fact the largest skate in U.S. waters.  While they are considered part of the skate complex that is landed in the fishery, their abundance has dropped precipitously.  The barndoor skate is actually in trouble.

And here’s what they were probably thinking of with that electric stuff: 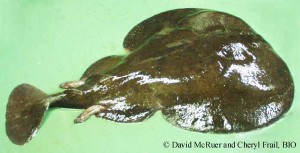 Torpedo rays are native to the same New England waters where winter skates are abundant.  These rays actually do deliver electric shocks and have to be handled with a rubber shovel when they’re on the deck.  Interestingly, they have a very gelatinous constitution (I guess you don’t need to be too muscular when you can just zap stuff) but look almost like a flying saucer when in the water.  Very cool animals.  They aren’t terribly common, but are common enough that I’ve personally seen a few on the deck of a boat (don’t worry, I didn’t get shocked). 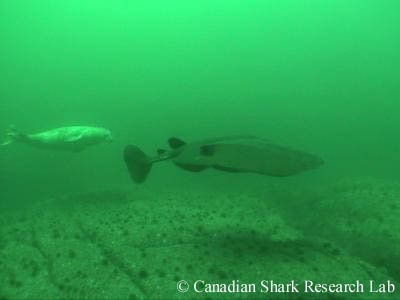 This torpedo ray is lulling the seal into a false sense of security before elecrocuting the hell out of it. Photo from marinebiodiversity.ca.

If you could splice together these two batoids you might get a hybrid that fits the description put up by Animal Planet.  As it stands, it’s unlikely that the winter skate is truly endangered, and it’s a lot less likely that it’s capable of delivering electric shocks.  The moral of the story: do your research, so you can avoid being called out by snarky bloggers.