As I mentioned earlier, while  several representatives from the wet blogosphere were at Science Online, Dan, me, and the rest of the ECU crew were at the Southern Division AFS meeting.  A good time was had by all, and yes, there was some science there to.  I ended up being too busy both socially and professionally to update from the front lines, so now that I’ve (somehow) returned alive, here’s the recap.

The meeting took place in Tampa, Florida, which was a nice departure from the uncharacteristically cold North Carolina, even if it was uncharacteristically cold for Florida.  We ended up getting comped rooms at the Hyatt (where the conference was taking place) in exchange for helping with registration and AV, which was a great way to get the student members both involved and present.  However, our comped rooms didn’t kick in until Friday.  Fortunately, fellow ECUer Annie is a native of the Tampa Bay area, and hooked us up with this place. 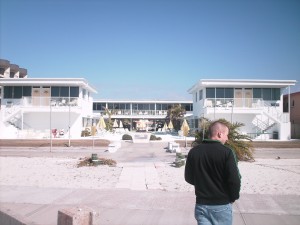 The Sands, an awesome old-school beach hotel in Treasure Island, just outside of Tampa.

The Sands sat right on the Gulf coast, a body of water I’ve never had the pleasure of seeing in person until this past week.  Of course I had to take some pictures. 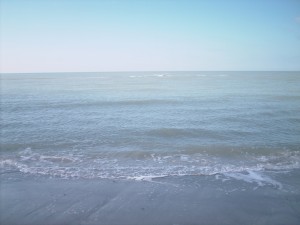 The unseasonably chilly waters of the Gulf of Mexico. 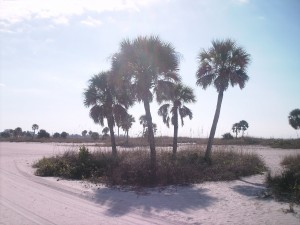 The beach at Treasure Island is much more maintained than I'm used to and practically flat, but these little islands of dune plants are dispersed throughout. 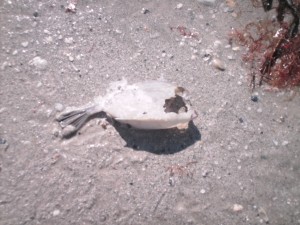 Boxfish are certainly something I haven't seen washed up in North Carolina.

Due to the cold snap, we weren’t able to get any fishing or swimming in, so I guess I’ll have to go back to properly experience Tampa waters (oh, the horror).  We spent a couple nights exploring downtown St. Petersburg before moving over to the Hyatt for the conference proper.  There were some absolutely beautiful mangrove areas right next to the hotel (apparently these areas were sectioned off as “Nature Preserve” by the hotel) which offered some great views as we chowed down on some of the best seafood I’ve ever had (if you’re staying at the Grand Hyatt in Tampa, make sure to eat at Oystercatchers at least once.  Awesome food, mostly local, and not cripplingly expensive.). 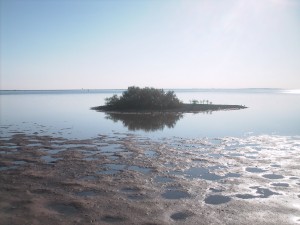 Tidal flats and mangrove island viewed from the nature walk behind the Hyatt. 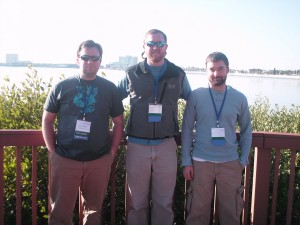 Me, Jacob, and Dan enjoying t-shirt weather for the first time in months.

Just as the weather finally started to heat up (at least by our comparatively northern standards) so did the conference.  Dan and I gave talks, while the rest of the ECU contingent presented posters.  Here’s the rundown of the stand-out talks I checked out:

This conference hosted a surprising number of elasmobranch talks (welcome after the national meeting’s whopping one shark talk).  Several were given by researchers connected to the David W. Kerstetter lab at Nova Southeast University, which is appropriate given that it’s main area of research is highly migratory pelagics.  David Kerstetter himself talked about movement patterns observed in pelagic stingrays, which was damn interesting since no one has ever really researched that species.  There is definitely something to be said for researching an animal pretty much just because it’s awesome, which is a great gig if you can get it.  T. Weidner (I really need to get better about writing down people’s first names) followed up with an interesting talk on pelagic stingray feeding habits.  Apparently they associate with sargassum, which explains the prevalence of seahorses in their diet and may cause them to have a different stable isotope signature than just about every other large pelagic predator.  F. Carvalho tracked depth range use by blue sharks and found that they tend to show up at the same depths targeted by longline fisheries for tuna and swordfish.

Of course it wasn’t all the Kerstetter lab.  Lillian McCormick presented research on leopard shark aggregation and movements and found that they may be influenced by the tides, but can vary by location (it also turns out she worked with fellow elasmophile and confirmed badass Andy Nosal on this project.  Small world).  Eric Hoffmayer was present and talked about large aggregations of whale sharks in the Gulf of Mexico and how they may be being affected by that giant black elephant in the room, the Deepwater Horizon spill.  In another display of how small a world fisheries science and marine biology can be, I ran into Tara Syc, who was a classmate of mine at URI and was presenting data supporting the hypothesis that artificial reefs are actually quite good for red snapper recruitment.  Unfortunately having to catch my flight back to NC prevented me from seeing her talk, but I did catch one by her labmate Maria Piraino testing a new telemetry system used to track fine-scale movements of red snapper on artificial reefs (something I may need to look into since telemetry is something I may be dabbling in in the near future).

The ECU crew was well-represented at this conference.  Dan Zapf knocked it out of the park as usual.  That man knows his methods.  Obviously I’m way too biased to rate my own talk, so hopefully anyone who reads this and also saw me speak will either chew me out or praise me in the comments.  We were very present in the poster session: Jacob Boyd showed off his “striped bass babymakers” in his update of maturation schedule for the Albemarle Sound striper stock, and Coley Hughes and Jeff Dobbs presented their preliminary work on identifying striper spawning grounds in the Pamlico Sound and elsewhere in North Carolina.  Joey Powers showed off his work looking at nursery habitats of spotted seatrout and red drum.  Annie Dowling rounded out the ECU presence with a poster on her undergrad work testing the efficacy of ciguatera detection by a consumer-level product.

Overall another quality conference from the American Fisheries Society.  Look for me again at the AFS Tidewater Chapter conference, coming up in March.