It wasn’t my intention to keep picking on the Mediterranean, but this paper was just too damn interesting.  In the Mediterranean, like many other marine environments worldwide, numbers of jellyfish and ctenophores (those really colorful comb jellies, actually not related to jellyfish) have recently exploded.  According to a recent PLoS One paper by researchers from the University of Barcelona (Cardona et al. 2012), a possible explanation may be that their predators are overfished.  This isn’t too shocking a finding (especially in the consistently overfished Mediterranean), but what is interesting is just who some of those predators are.  Also, this paper represents exactly what I like to see in a stable isotope paper.

Cardona et al. (2012) wanted to find out exactly which predators are supposed to be eating all these gelatinous creatures that have been taking over the Mediterranean Sea, and to do that, they checked out just about every high-level predator that’s still regularly encountered there.  This includes bluefin tuna, blue sharks, bluefish (which I didn’t even know made it into the Med), swordfish, fin whales, and some confirmed jellyfish predators like mola mola and loggerhead turtles.  The way the gelatinous portion of the diet was tested was by using a combination of gut contents and stable isotope analysis.

If you’ve ever eavesdropped on any of the discussions between David and myself on stable isotopes, you know that my feelings on this method are that it’s useful, but right now it’s suffering from “magic method syndrome.”  This occurs when a method is relatively new and novel and everyone and their advisor is rushing to show how the method can be used to prove everything without ever stopping to properly verify it.  Fortunately, Cardona et al. (2012) did it right.  So how does stable isotope analysis tell us what a predator was eating?

Stable isotope analysis can be boiled down to the phrase “you are what you eat.”  Every living thing has a certain isotopic signature, and for feeding habits analysis the most useful isotopes to look for are Carbon-13 and Nitrogen-15.  The relative amount of these two elements in the tissues of a given organism can be used not only to identify that organism, but also represent an “average” value of all the combined prey that make up a predator’s diet.  In order to affect the isotopic signature of the predator, the prey have to show up often in the diet, so isotopes can potentially be used to identify important prey that aren’t apparent in normal gut content analysis.  This could be useful in figuring out the importance of soft-bodied, quickly digested prey (jellyfish and ctephores, perhaps?) in the diets of some rather high-profile predators.

Where many stable isotope talks I’ve seen at conferences drop the ball is that the researcher hasn’t bothered to get an isotopic signature for the prey or verified that the prey they’re looking at actually show up in predator stomachs.  Cardona et al. (2012) did do this.  Here’s what the stable isotopes for several common prey species in the Mediterranean look like. 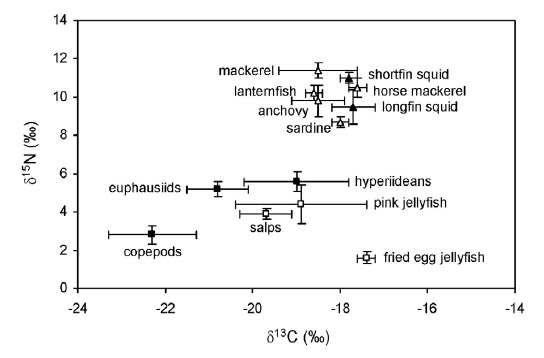 Isotopic signatures for common prey in the Mediterranean Sea. From Cardona et al. (2012).

Take note of where the different prey species show up on the chart.  The more active, stout-bodied prey like schooling fishes and squid all cluster up towards the upper right, the gelatinous prey are more loosely grouped to the lower right, and crustaceans like krill and copepods are closer to the lower left.  Therefore, any predator that eats primarily fish should have an isotopic signature that skews to the top right, and so on.  To further back up the isotopic signature, the gut contents of at least 5 individuals of each predator were checked.

Once all the analysis shook out, some predators turned out to be exactly where the literature and their gut contents said they should be.  Blue sharks, bluefish, dolphins, whales, and many of the other predatory fish had isotopic signatures that matched up pretty well with their gut contents (since this is primarily a shark blog, for the record the blue shark turned out to be a fish and squid eater).  This was also true for the mola mola and loggerhead turtle, which were expected to eat a lot of jellies.  However, there were some interesting mismatches where some very large, very fast predatory fish had gut contents dominated by fish, but isotopic signatures that suggested they eat jellyfish and ctenophores by the ton.  These included spearfish, swordfish, little tunny, and bluefish tuna.  Wait… bluefin tuna? 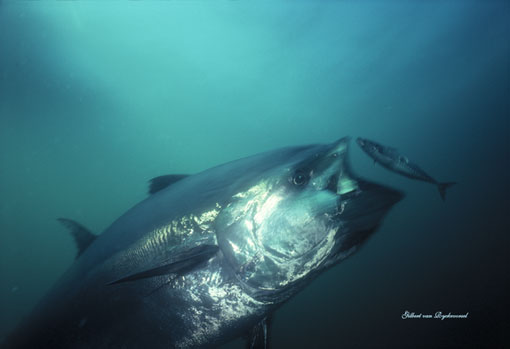 Since jellyfish are 95% water, they help wash down the fish. Image from salmonphotos.com.

This result flies in the face of the image of bluefin tuna as lightning-fast hunters of school fish, but Cardona et al. (2012) suggest that gelatinous critters may account for up to 80% of the diet of small bluefin tuna, and as much as 60% in adults.  A predator with the metabolism of a tuna or swordfish would need to eat a lot of jellies to make this proportion of the diet worth it.  To make munching jellyfish energetically worth it, an adult bluefin tuna would have to eat 14.2 kg (31.3 lbs!) of jellies per day.  That said, jellyfish and ctenophores tend to be highly abundant and it’s hard to imagine anything less energetically costly than swimming mouth open through a pile of comb jellies.  It’s not unheard of for other primarily fish-eating predators to take large numbers of easily-eaten jellies: spiny dogfish are a great example of this.

With such a huge dietary requirement (even the lowbrow estimate still requires a daily ration of 7.1 kg/15.6 lbs of jellies), it’s not hard to imagine that bluefin tuna may be a critical source of top-down control on gelatinous organisms.  Perhaps I should say were a critical source of top-down control.  The plight of bluefin tuna is well-known and the species is doing particularly bad in the Mediterranean.  Cardona et al. (2012) don’t go as far as saying the predator/jelly relationship is proven, but it is at least strongly suggested by the data.  Could this be evidence that overfishing of bluefin tuna has caused a trophic cascade resulting in a more gelatinous Mediterranean Sea?