After most of a semester in the office, I finally managed to get out on the water this past weekend.  I traveled down to Hatteras with Andrea to help out with the latest piece of his project tracking different life stages of spiny dogfish.  He managed to get his quota of adult males and females during the Rulifson lab‘s trips up to Cape Cod, but his mission this winter is to implant acoustic transmitters into juvenile-sized dags to get a better understanding of where the little guys go.  Of course I also had an ulterior motive: Andrea had told me about all the other sharks they had encountered while chasing dogfish the week before, and I wanted to get a look at them.  The catch is that it’s been as freakish a winter in North Carolina as it has everywhere, especially off of Cape Hatteras, which in normal conditions is a huge mixing area of for coldwater species from the north and subtropical species from the south.  Anything you can catch from Cape Cod to Cape Canaveral can and will show up at Cape Hatteras.

We met with Chris and James early on Friday.  Chris has a long history working with Dr. Rulifson, and knows the waters around Hatteras like no other.  James, his mate, is a fellow dirty Yankee.  The water was flat calm and the air was an unseasonable mid-50s.  Dogfish normally prefer cooler water, so would they be offshore at the edge of the acoustic array or right up on the beach? 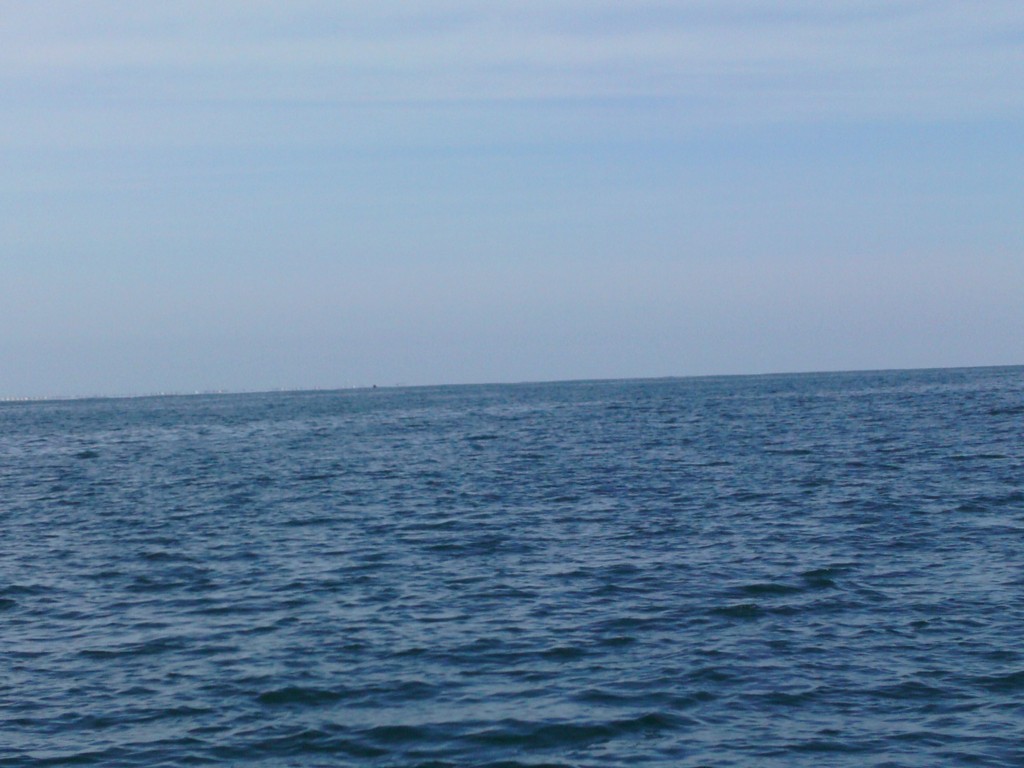 There aren't too many days off of Hatteras that look like this. Especially in February.

We set out gillnets with mesh size small enough to snag the 20-inch juvenile dogfish we were looking for, without getting piles of smaller fish.  The warm weather combined with the natural geography of Cape Hatteras meant that we kept finding highly localized temperature zones, but the water temperature stayed mostly in the mid to low-50s (extremely warm for February, even in the Carolinas).  This seemed to be driving bait: birds and dolphins were seen working up schools of fish so often that eventually we just started taking them for granted as part of the background.  False albacore were also spotted chopping at the surface. 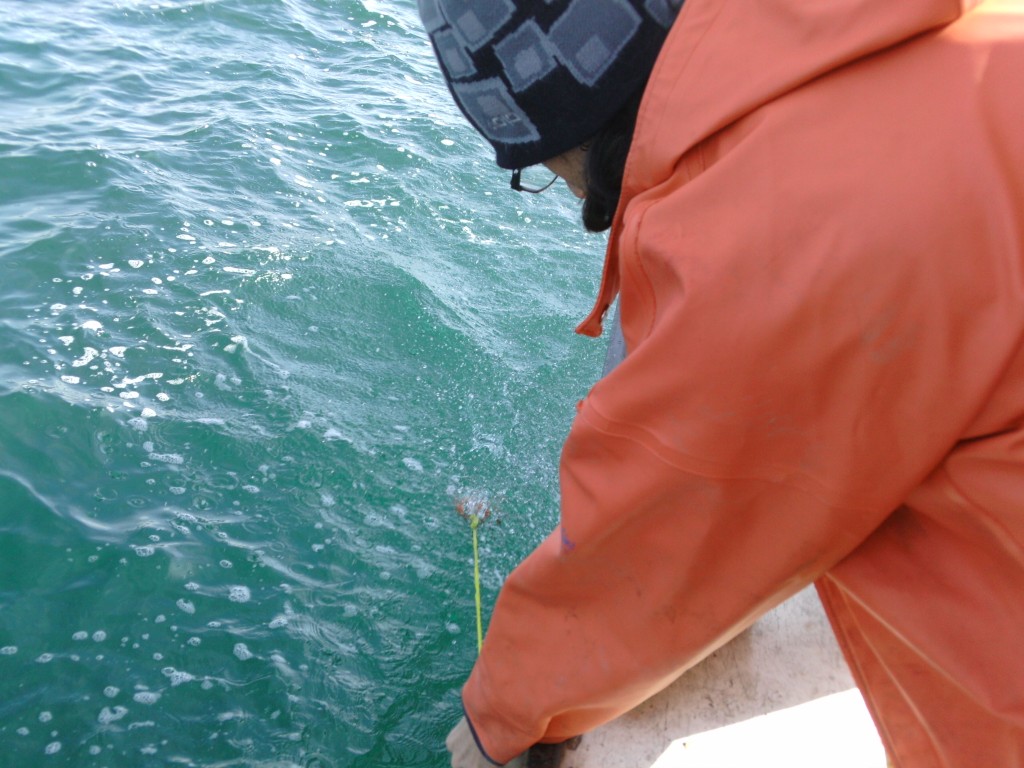 Andrea checking the water temperature and depth with a CTD. The water was a surprisingly tolerable 55 F. 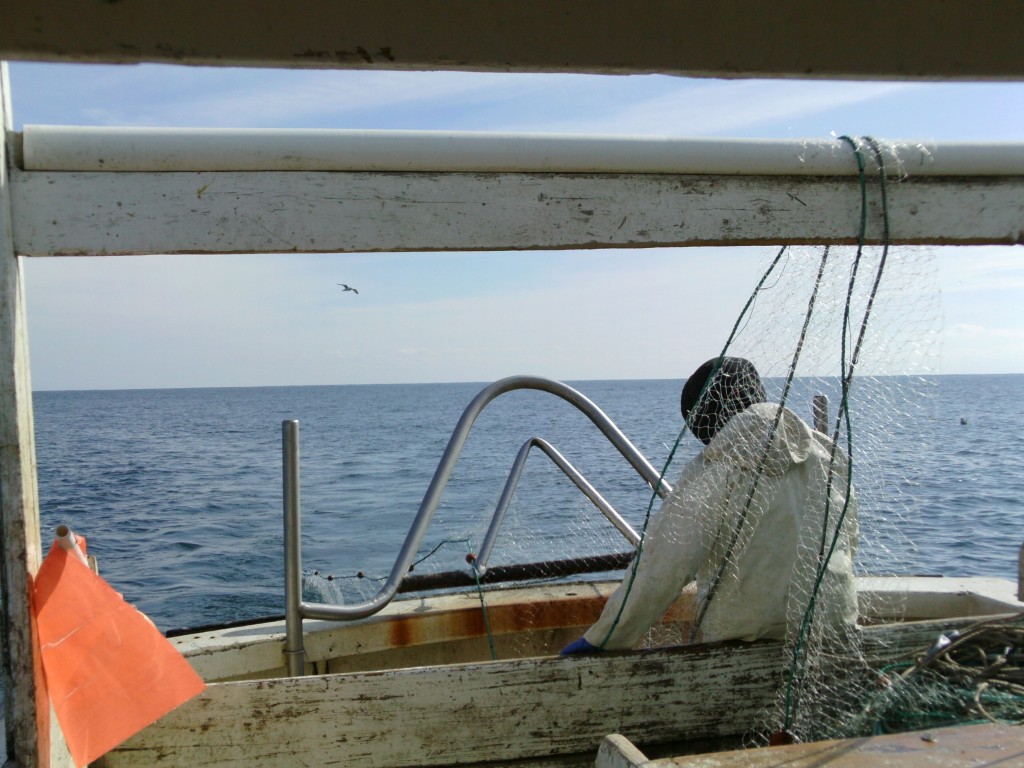 Setting the net in the sun.

The unusual water temperatures lead to some unusual catches, but no dogfish until we found them practically in the surf zone in 17 feet of water.  Not to say there weren’t other sharks farther from the beach. 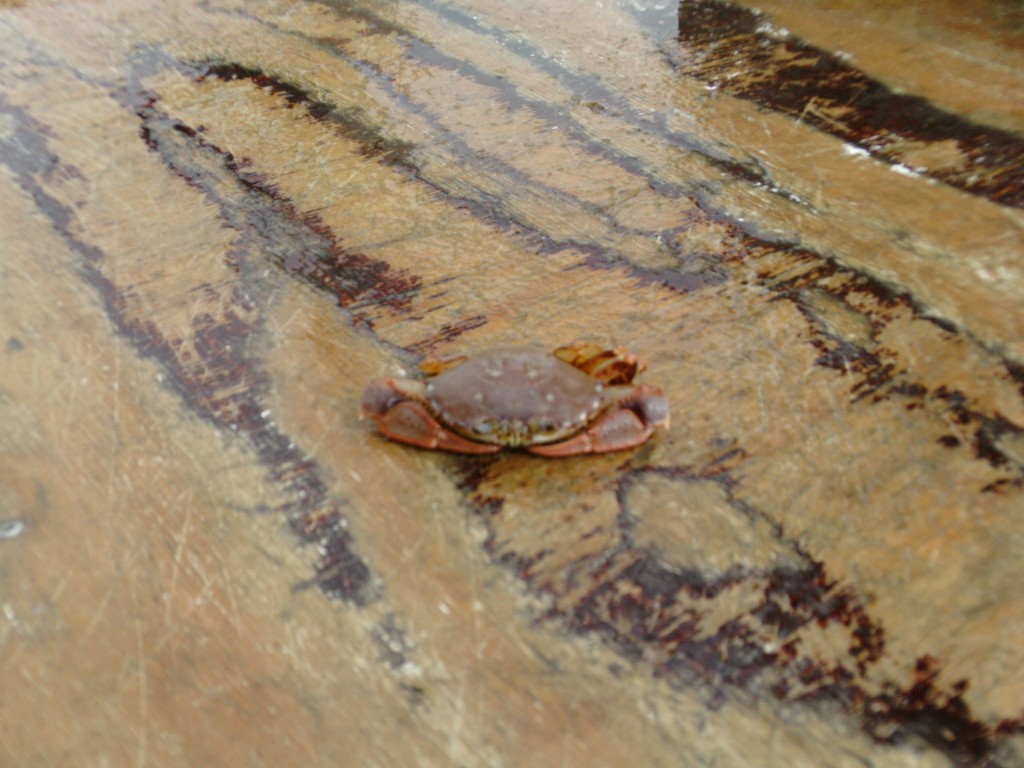 Not sure what this little guy is. It's definitely not a blue or lady crab but definitely part of the swimming crab family (Portunidae). Maybe one of you arthropod fans out there can help?

Atlantic sharpnose shark (Rhizoprionodon terraenovae). Unusual for this time of year, but not unheard of. We caught some of these south of Cape Hatteras during my field work.

A juvenile blacktip shark (Carcharhinus limbatus). A shark that really shouldn't be here this time of year.

I’m considering doing something coastal shark-related for my PhD dissertation, so I was pretty happy to observe and take data on the other sharks.  However, we didn’t find the spiny dags until the very last station, and even then only got something like 11 of them, none of which were juveniles.  Still, we were able to get some size, sex, and maturity data from the dogfish, which is still helpful to Andrea’s work.

On a linguist side-note, I learned that Outer Banks fishermen group sharks into two broad groups: “dogs” (smooth and spiny dogfish) and “biters” (everything else with teeth).  Some of the species have their own nicknames; sharpnose sharks are “white-dotters” for their white spots, while sandbar sharks are “elbow biters” for their ability to twist around and grab a handler’s arm while being held by the tail.  This system isn’t perfect, since spiny dogfish can be pretty formidable biters themselves.

The weather started to get a little more grim as we headed back to the dock.

The weather got a lot uglier on Saturday.  Wind was gusting in from the Northwest, but we were able to work along the beach on the south side of the Cape Hatteras hook and stay out of the worst of it.  The changing weather seemed to whip everything into a frenzy: it was impossible to turn around without seeing dolphins and diving birds, and some humpback whales even showed up (of course I was working at the time these things were happening, so no pictures to prove it).  This time we got into the dogfish, and got some other noteworthy catches along the way.  Note that there are no actual dogfish pictures, because when they showed up they appeared in numbers, keeping me from having the time to pause and snap a picture.  Again, we couldn’t seem to find any juveniles, but did get enough data from the mature males and females to potentially help describe any differences in sex distribution. 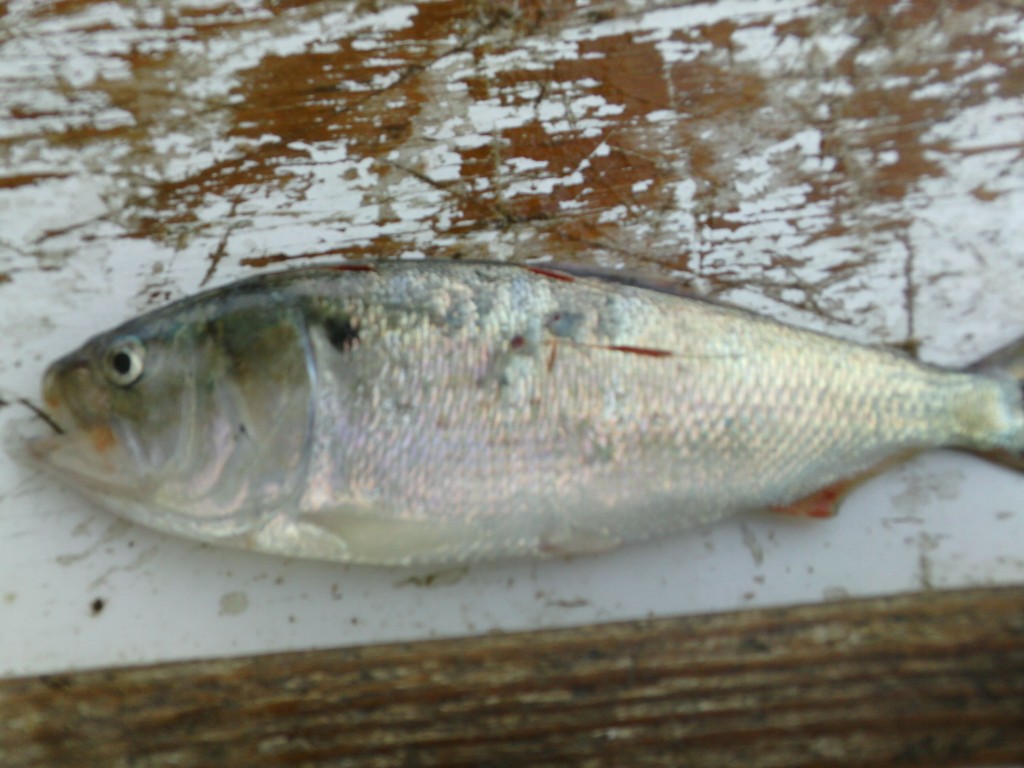 Menhaden were among the forage species being worked up by the local predators. This one was covered in parasites. Those red "strings" are the streamers of parasitic copepods. 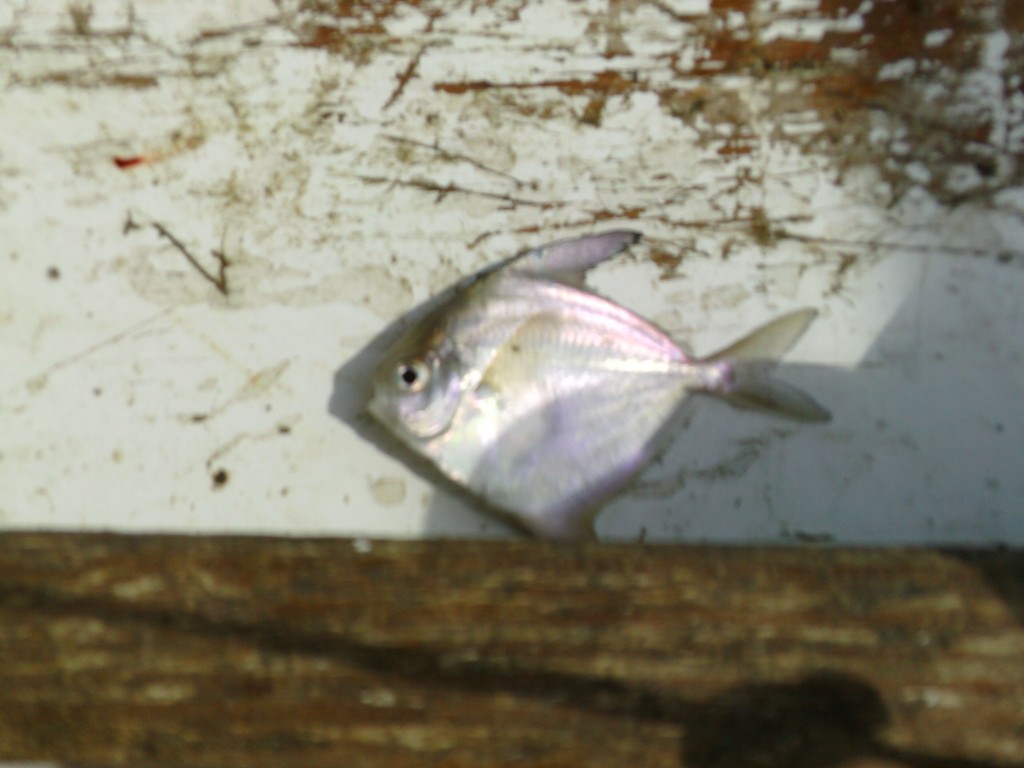 These harvest fish (or star butters, as Chris and James called them) are warm-water relatives of butterfish. Another species that probably shouldn't be in NC waters in February, but here they were coming up in the same nets as spiny dogfish. 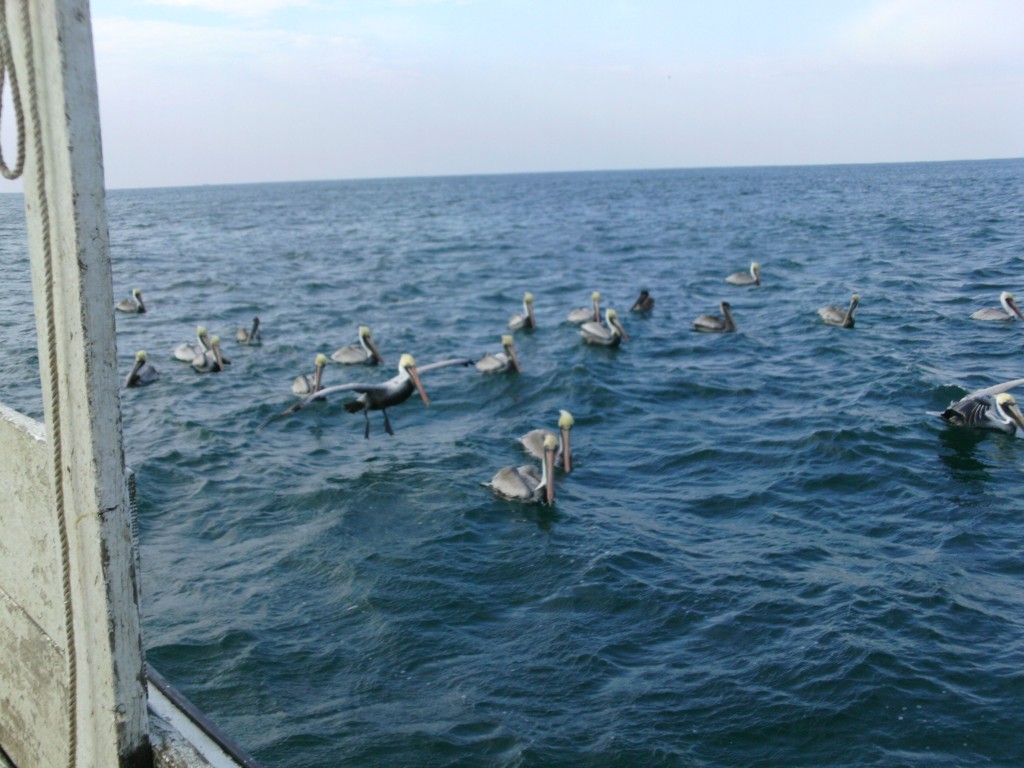 We were mobbed by pelicans, gannets, and gulls for most of the day. Very few released menhaden made it past this armada. They gave the dogfish wide berth though. 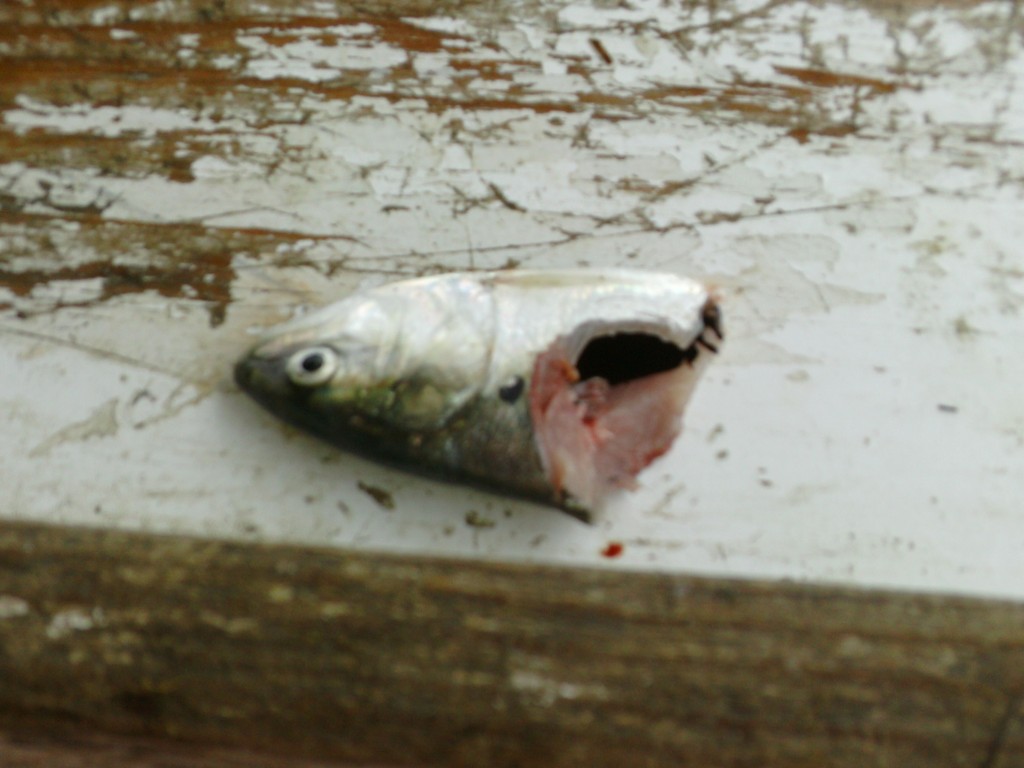 Evidence of dogfish predation. Note how clean the bites are. The ocean is a violent place. 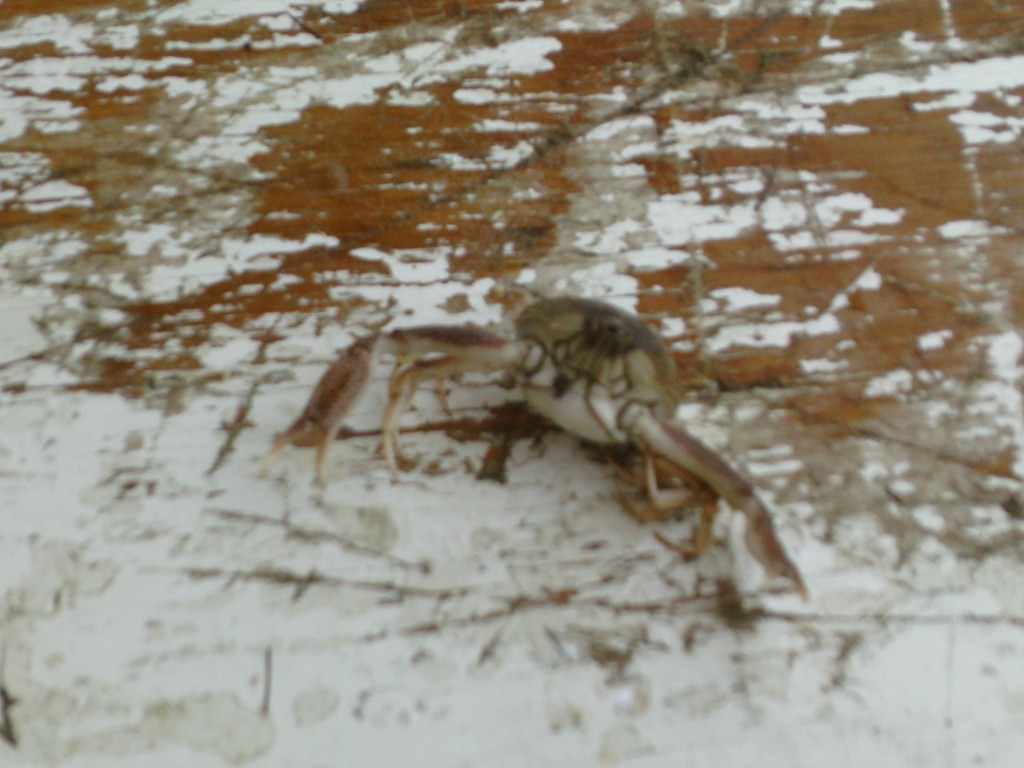 No idea what this crab is (some kind of spider crab?), but it looks like a Dr. Seuss character. Therefore, awesome. 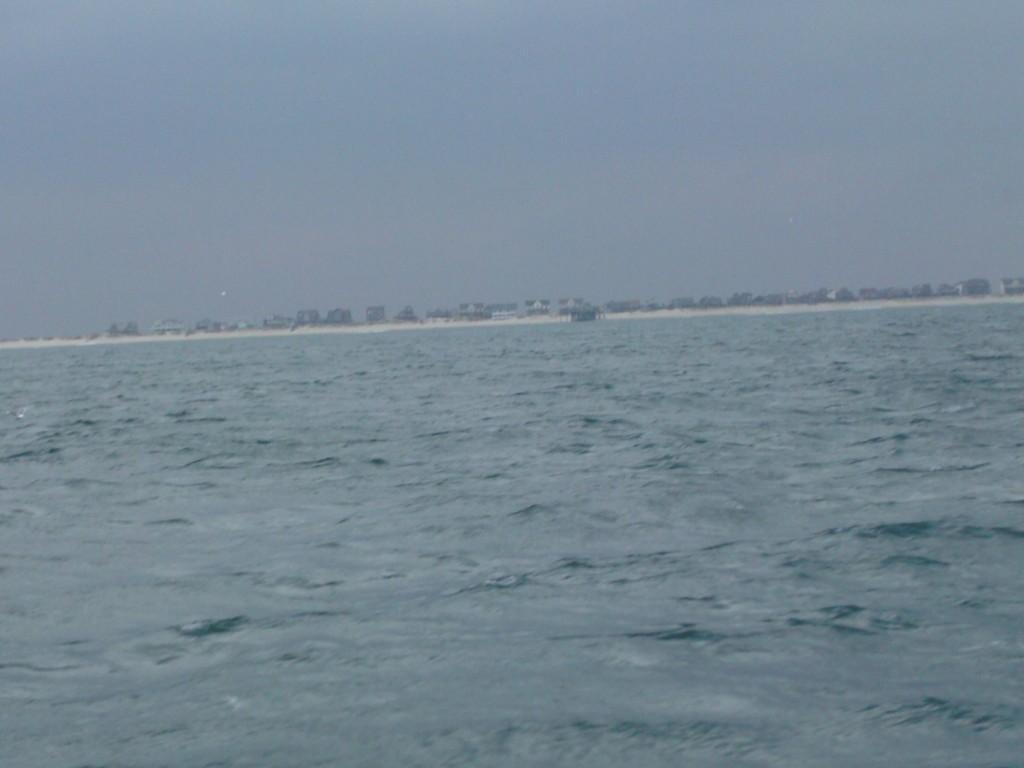 Once the weather started looking like this, we headed back in. Also, I've stayed in one of those beach houses.

Chris warned Andrea and I to head back as soon as we got all our stuff off the boat, and it turned out to be good advice.  A couple hours after we left, Rt. 12 (literally the only road from Hatteras to the mainland) was closed for overwash.  It may not have bee a totally successful trip, but it was certainly interesting.  And it was good to get a couple days of fresh air and fish slime.