Finally managed to get enough time between recuperating from the trip and moving apartments to sit down and give you all a recap of what I and the rest of the Rulifson lab have been up to for the past week or so.  As you may recall, last month we attempted to tag as many spiny dogfish in New England as we could, with the goal of having an equal number both north and south of Cape Cod.  We were also attempting to surgically implant acoustic transmitters into 20 spiny dogfish from each side of the Cape.  Once again we would be longlining with Mike and Max and gillnetting with Tom and Ryan.  All we had to do is finish the job we started in May, with the promise of better weather and more available dags.  Simple, right?

The first day had the roughest weather, but we had the advantage of only needing to finish off what we’d started with Tom and Ryan in May.  Though the conditions sometimes forced us to brace ourselves and scramble to snatch flying gear, the weather was already better than last time.  We managed to get caught up with the gillnet portion of the tagging north of Cape Cod, and then prepared for our southern safari. 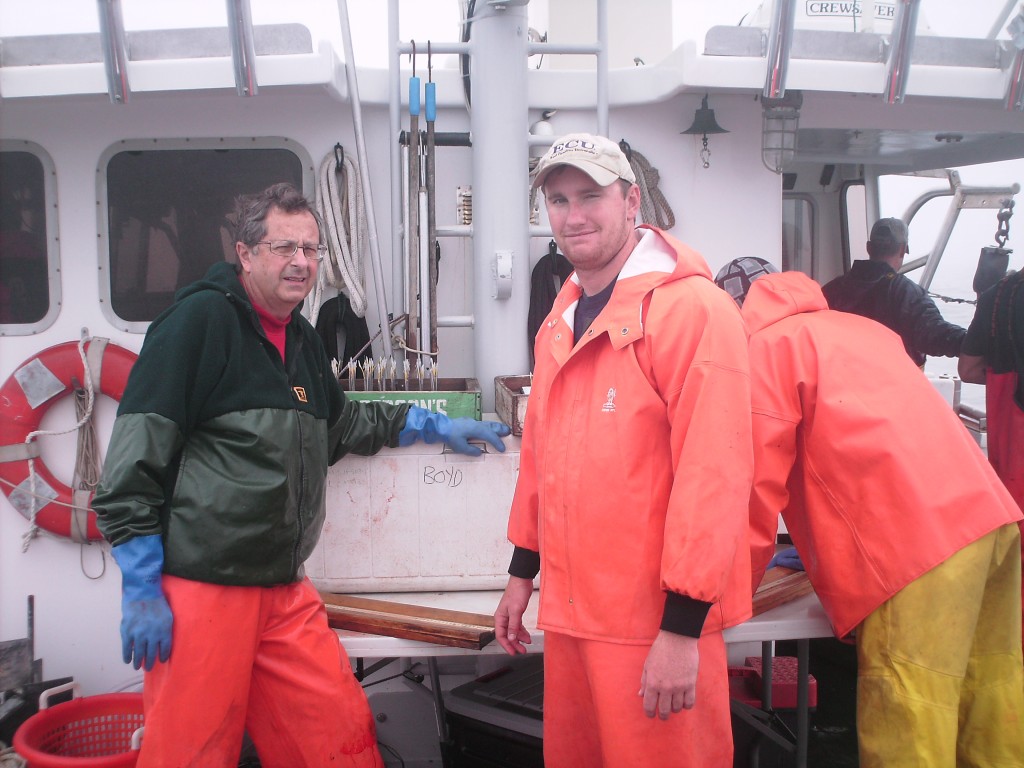 Our intrepid crew. From left: Dr. Roger Rulifson and Evan smile for the camera, while Andrea is too professional to look up from his work. 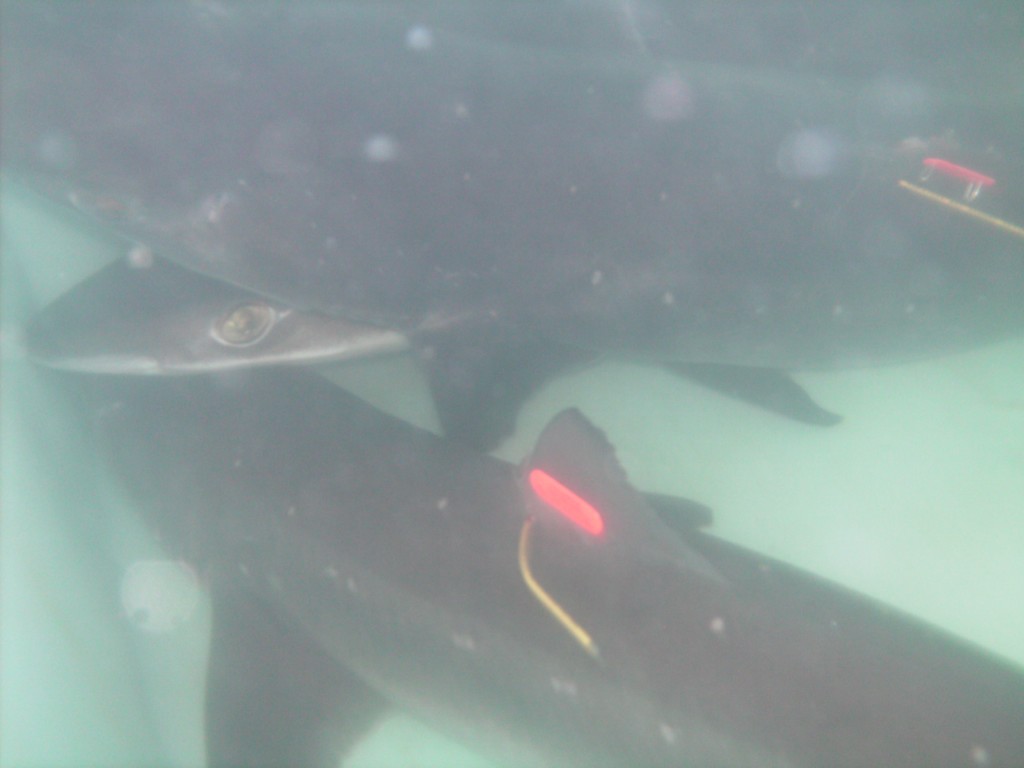 Chillin' in the live well. Dogfish with orange and yellow tags are carrying acoustic transmitters, and returning the tag and transmitter is worth a $50 reward. Those things are kind of expensive and we like to get them back when we can. 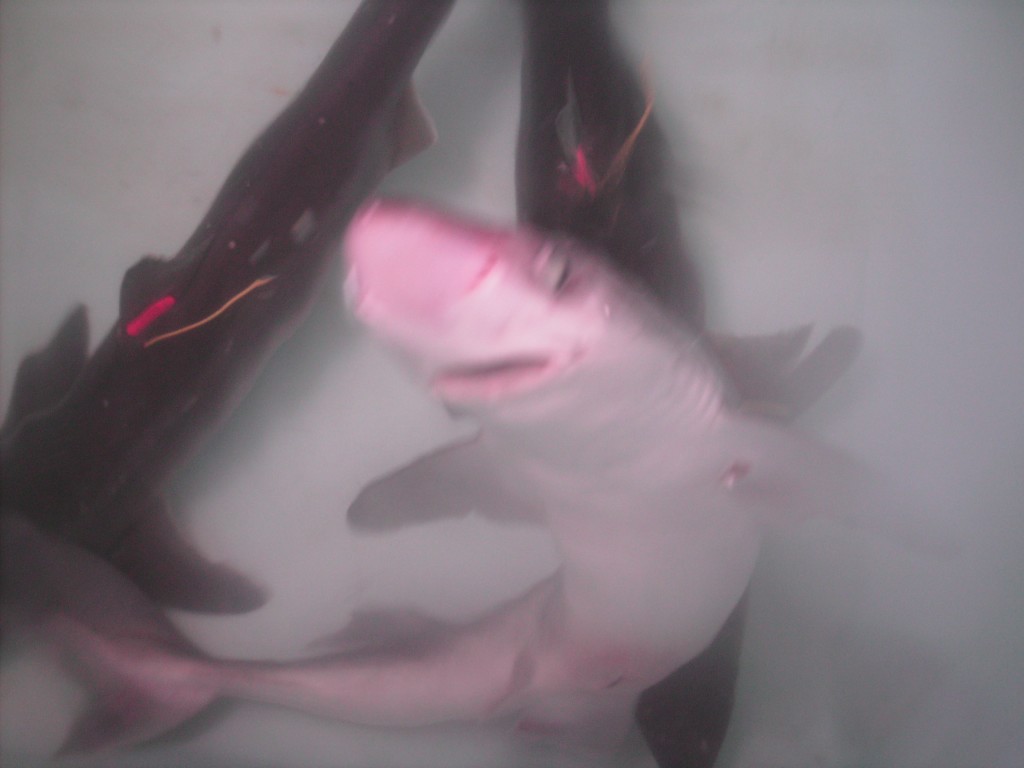 Spy-hopping dogfish. How do people not think these little guys are cute?

Our day out with Mike and Max we went for dogfish towards the south side of the Cape.  I was excited for this round because we were fishing near Chatham, which has emerged as a hot spot for great whites.  Unfortunately the visibility wasn’t that great so no big sharks were spotted, but we did have some nice calm water and ran into a healthy school of dogfish.  Between these two factors we managed to perform all our surgeries and tag all the fish we needed off of the first set. 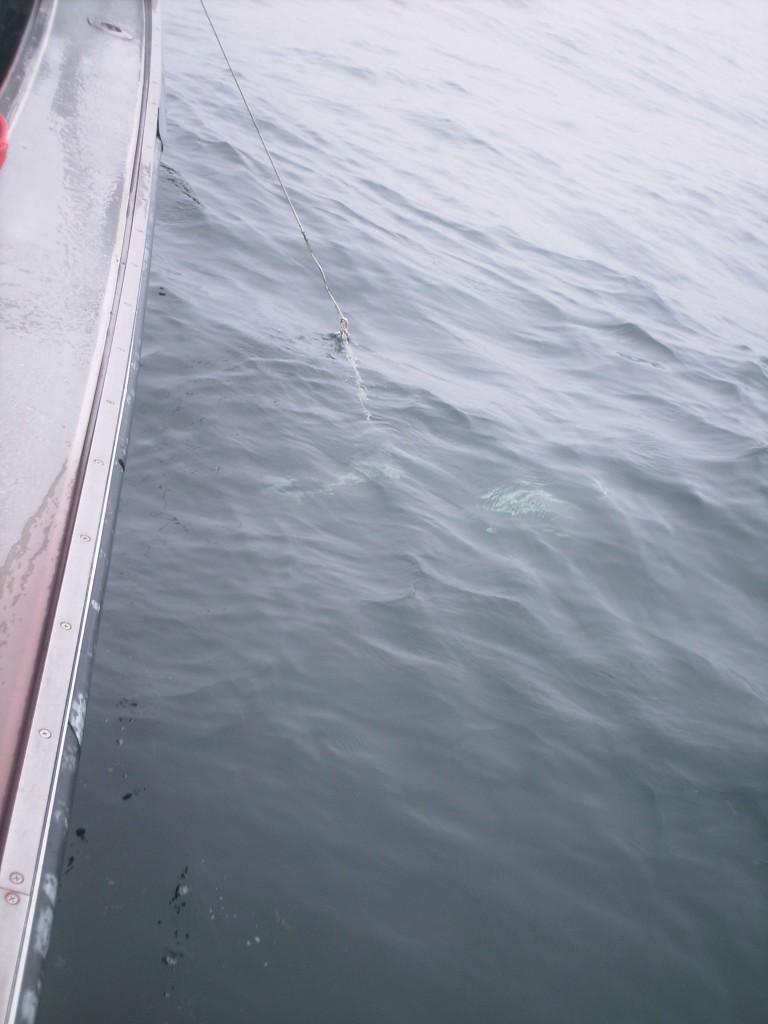 Shark on! The water in New England is much clearer than the pea soup in North Carolina.

Our next and final trip out was heading back to the Chatham area with Tom and the gillnets.  This time the visibility was fantastic and the water was glass calm, resulting in a ton of wildlife sightings.  Unfortunately we got into an odd patch of water where the dogfish were replaced by a bunch of useless striped bass (they aren’t even any good to the gillnetters, who aren’t allowed to keep them).  We found the dogfish eventually, and in the process had a better day whale watching than most people who pay good money for the experience.  At one point a humpback whale spent a good 10 minutes breaching and fluke-slapping in front of us.  Dr. Rulifson got some great video of it that you can see here (I can be heard making smart-ass remarks in the background). 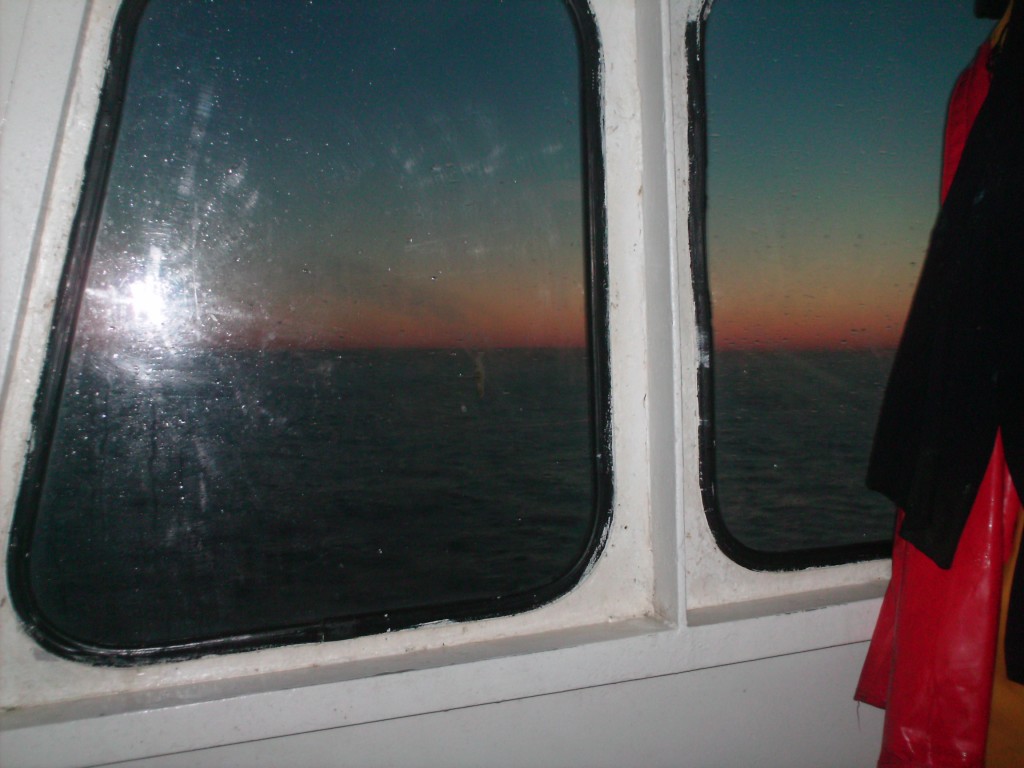 We got up pretty freakin' early for this trip. Sunrise was a good hour and a half after we left the dock. 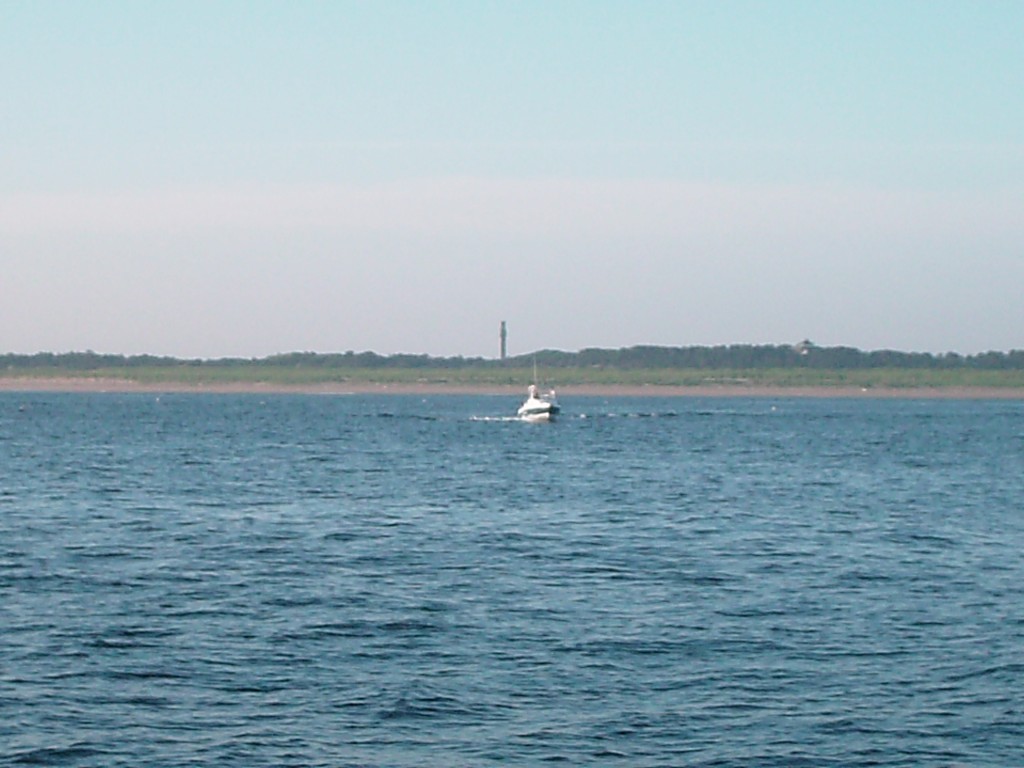 The great weather brought out a lot of boats. The lobsterman is checking his pots off of Provincetown, with the Pilgrim Memorial in the background. 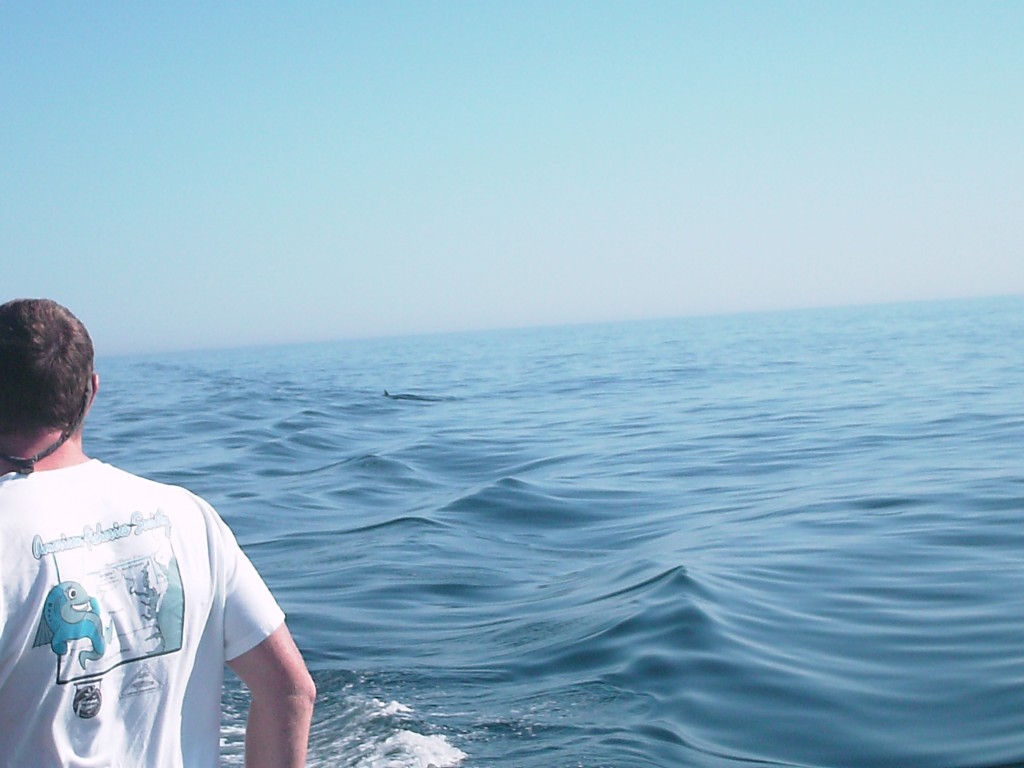 At one point we were followed by what I think is a minke whale, though my whale ID skills are certainly questionable. 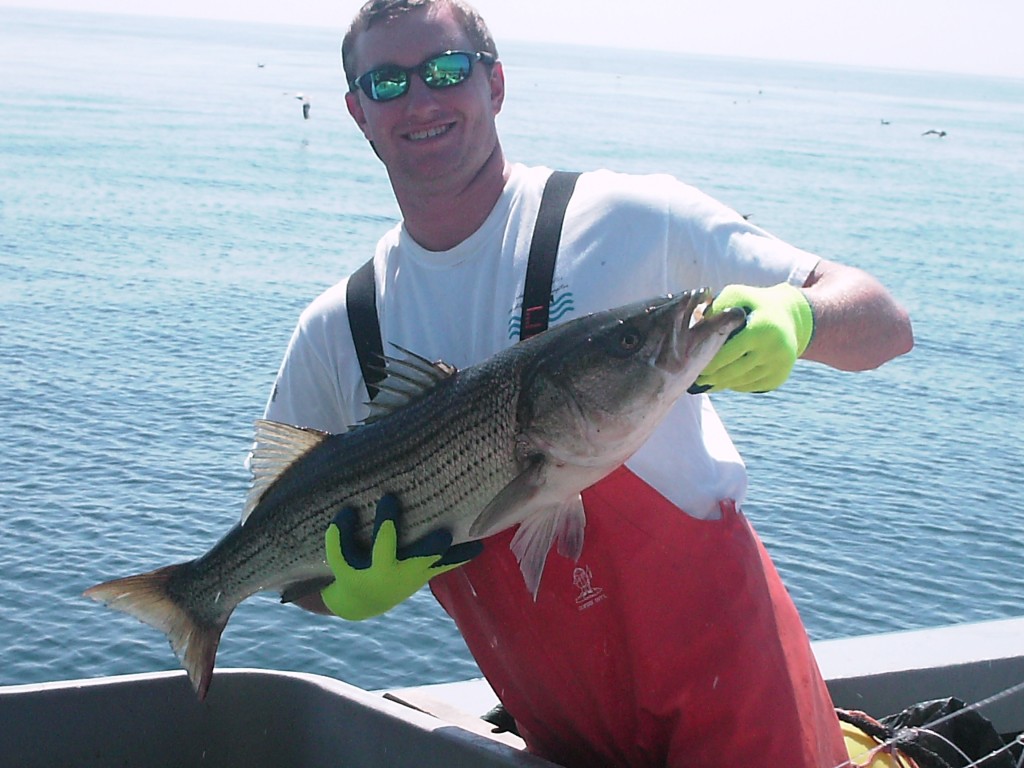 Evan caught this striper with his bare hands. The gillnet had nothing to do with it. 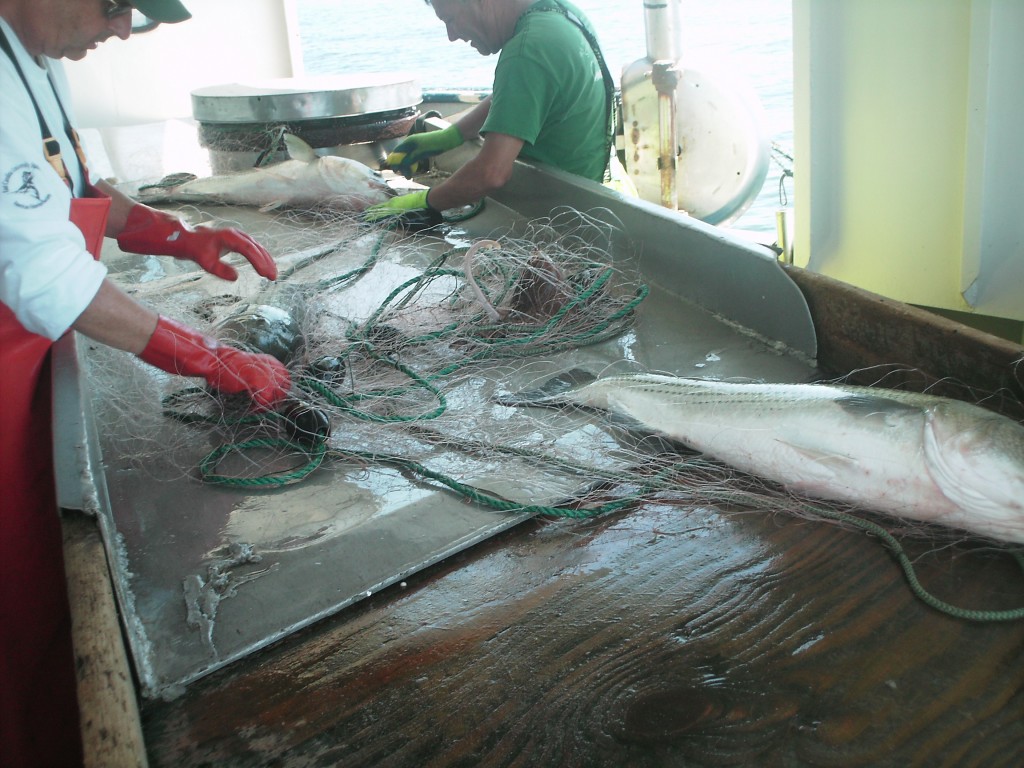 In case you thought I was kidding about the stripers being thick in that area. Obviously this is a nuisance species that needs to be fished down. 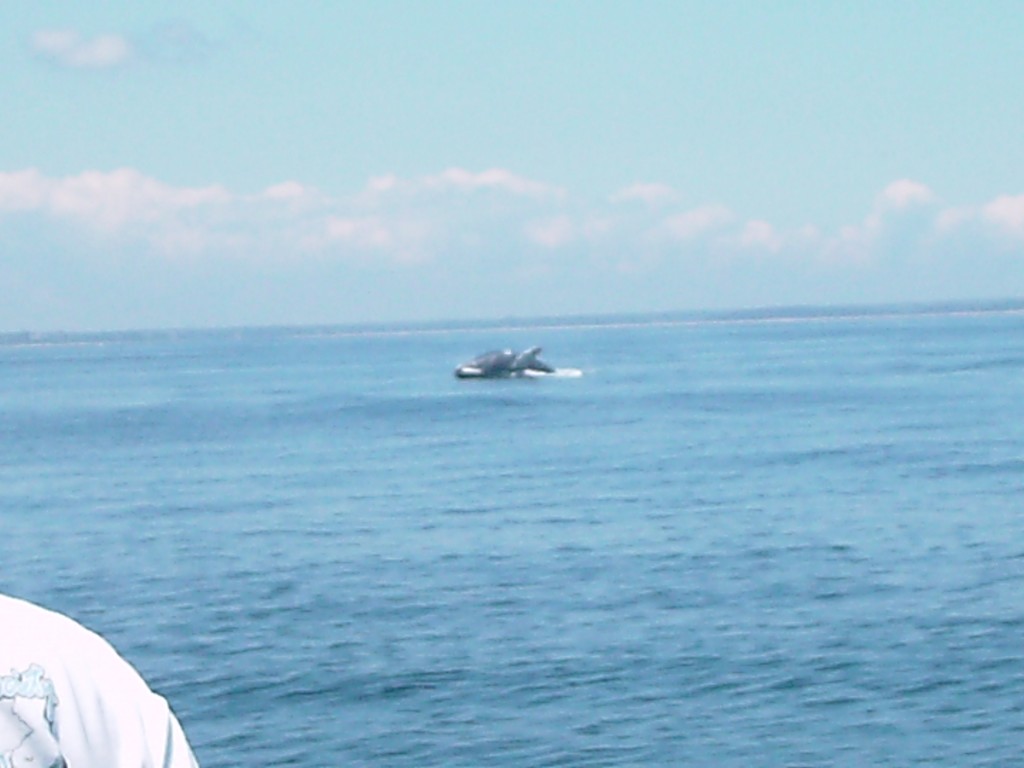 Getting a breaching shot this mediocre took a lot of effort. Fortunately this humpback whale stuck around long enough for me to start getting the hang of it.

These humpback fluke slaps made a loud crack every time they hit the water. I bet they do this for fun. 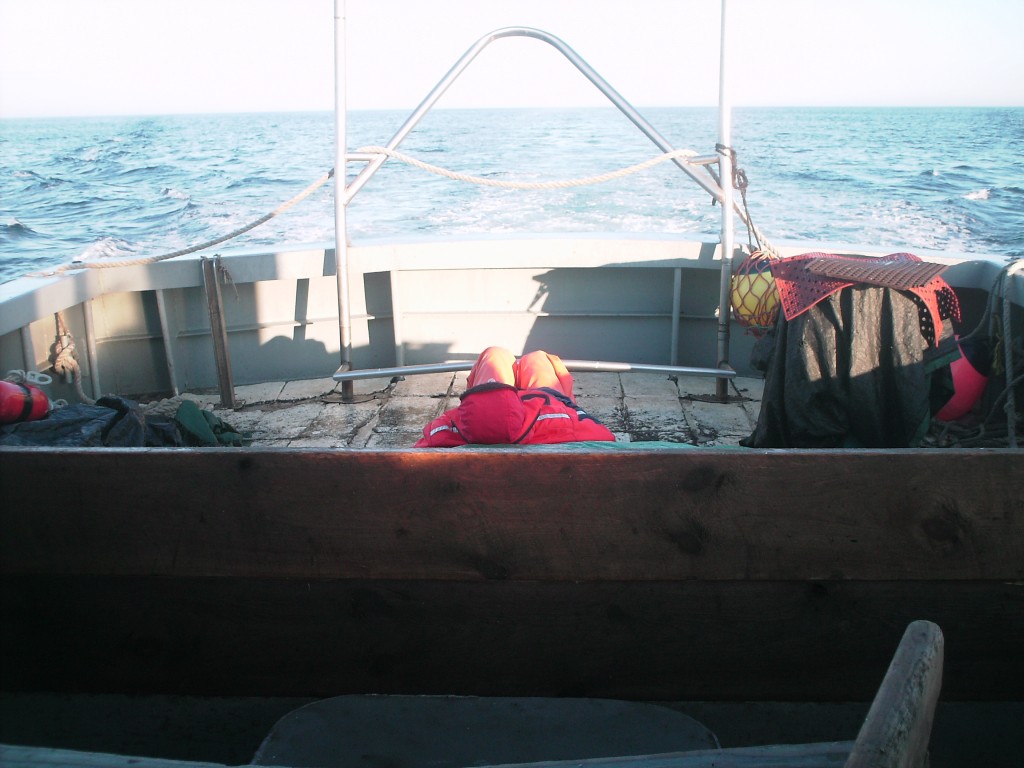 Dr. Rulifson catching some shut-eye on the gillnet as we travel.

Things got interesting towards the end of the day.  Despite meeting the boat at the downright decent hour of 3:30 a.m. we still managed to not find a good school of dogfish until the sun started to set.  This resulted in a couple of overnight sets and us sleeping aboard the boat (Tom’s boat does have some comfy bunks).  The overnight sets also allowed us to meet one of the most horrific denizens of the sea… 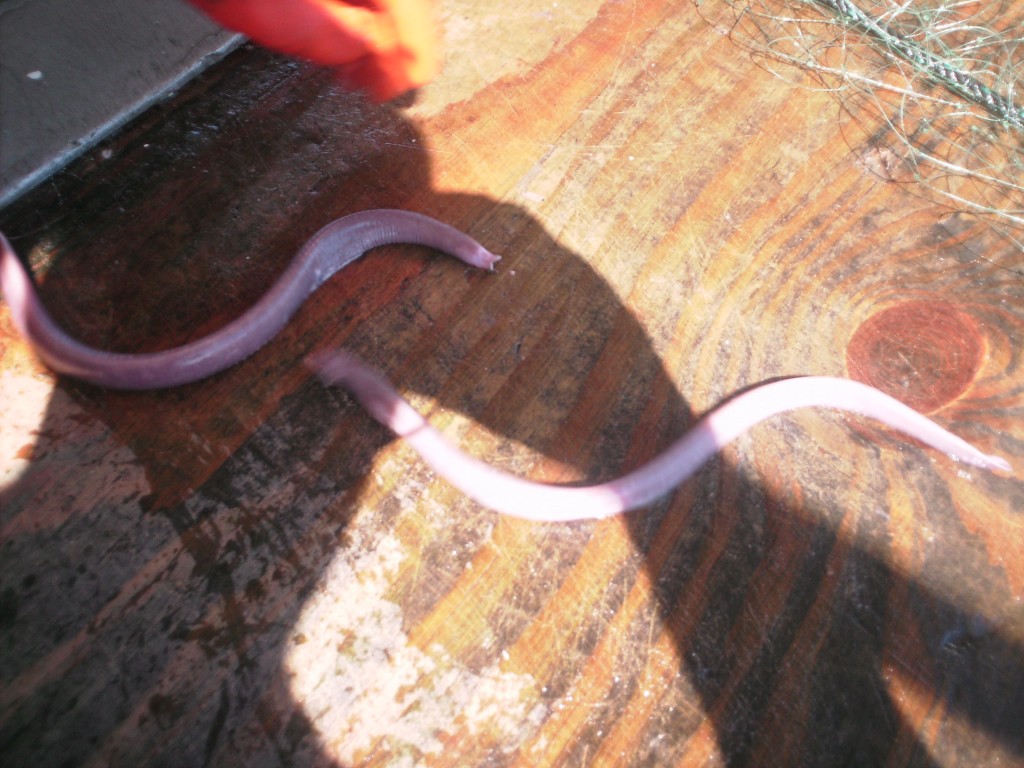 Whether you call them hagfish or slime eels, the name is totally appropriate. Introducing the most primitive fish currently alive in the ocean. 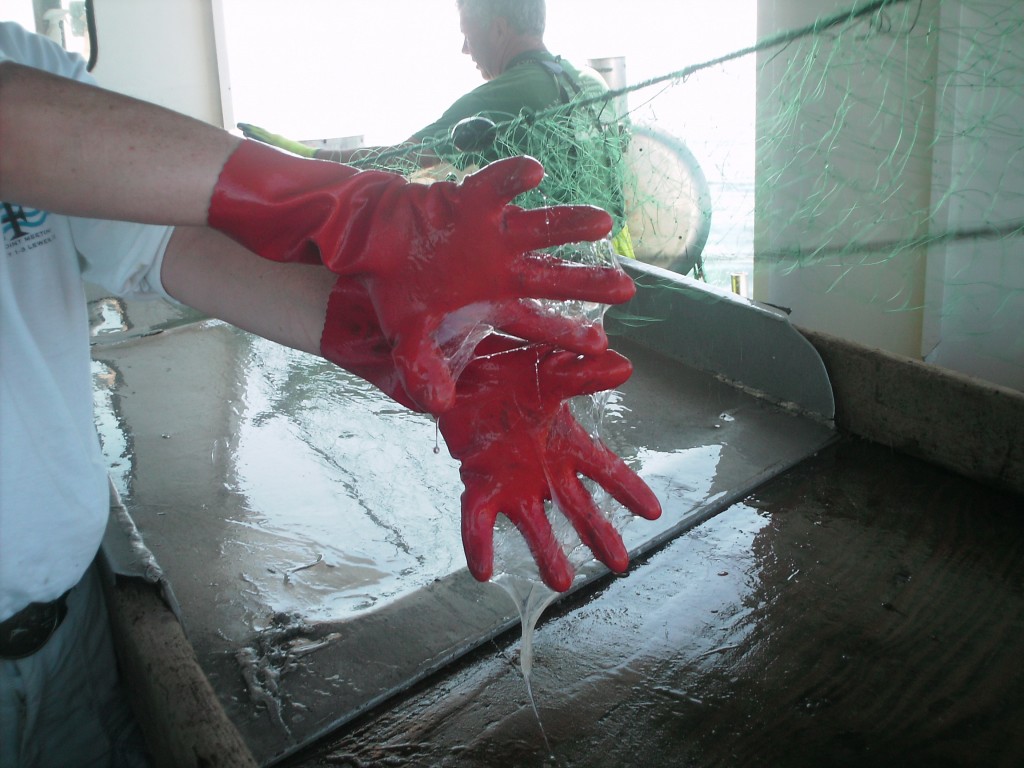 What hagfish lack in jaws they make up for in slime. These are Dr. Rulifson's gloves after handling one hagfish for about two seconds. 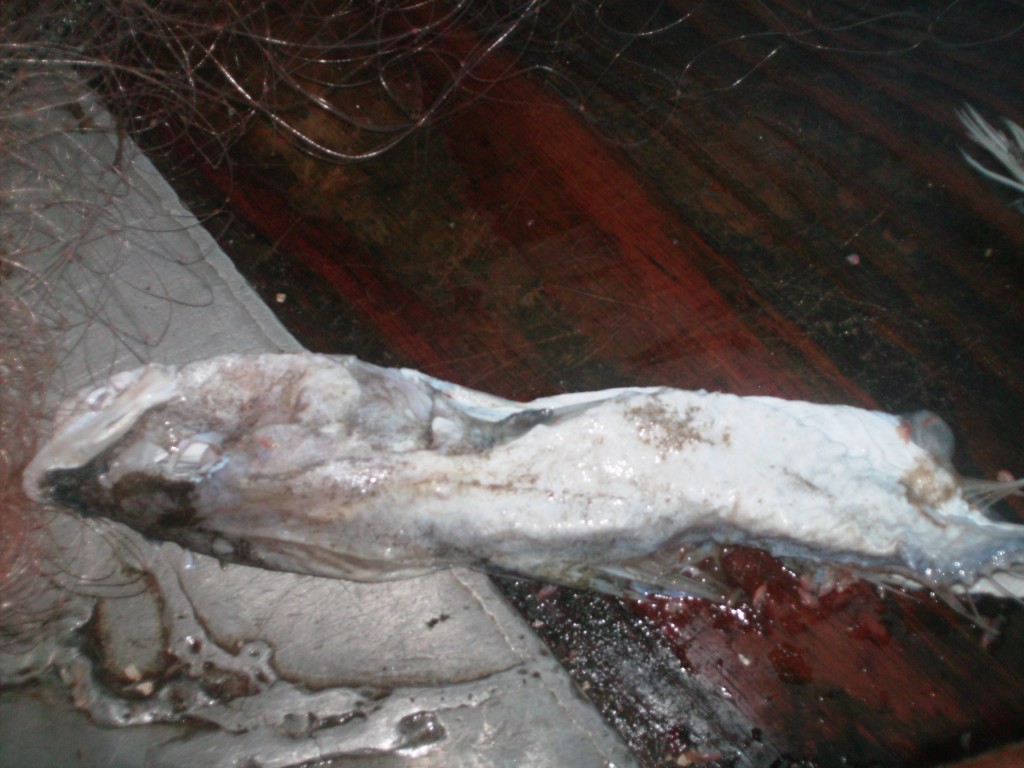 You can tell hagfish have been in the net when you start finding creepy hollowed-out fish like this cod. When a fish becomes entangled and immobilized in the net, the hags strike, burrowing into the nearest orifice and devouring their victim from the inside out. Undoubtedly one of the worst ways to die in the ocean. 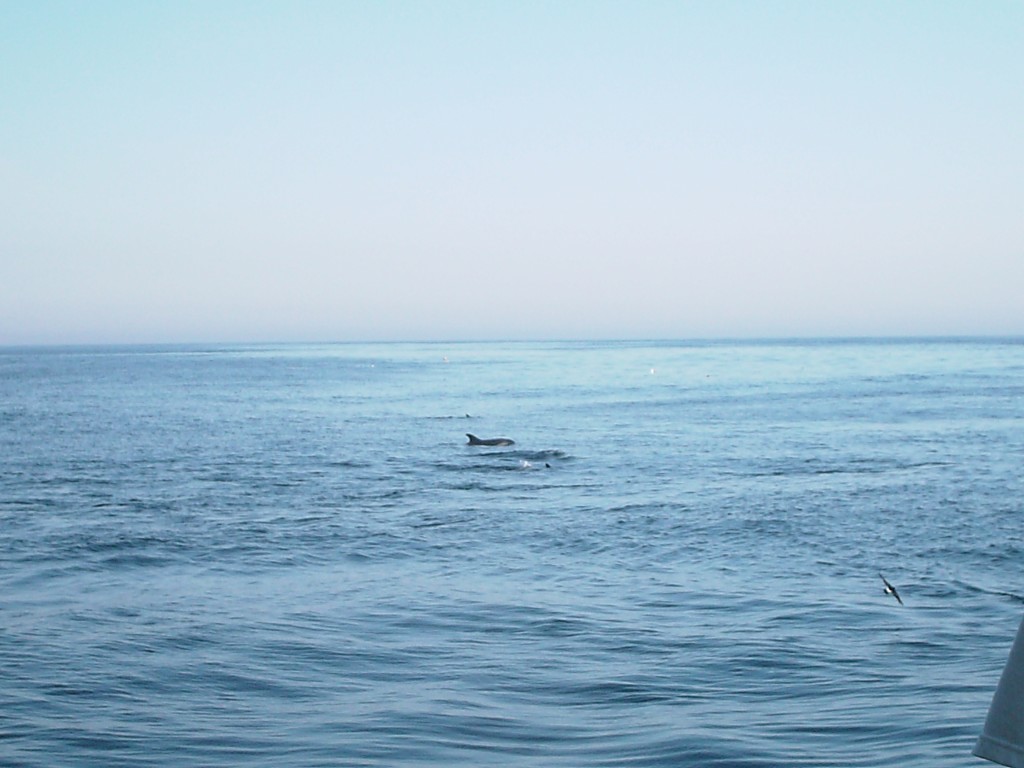 We did see some prettier marine life after the overnight sets. Dolphins are almost as cool as spiny dogfish. 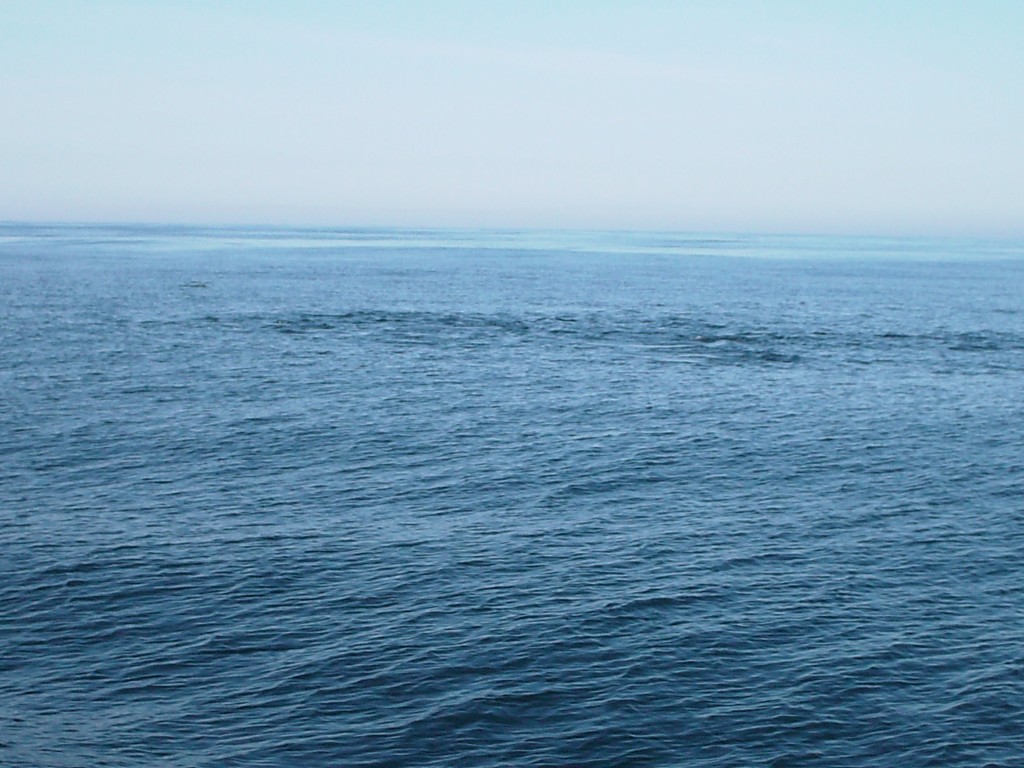 In case you were wondering, this is what a school of ginormous bluefin tuna looks like as it cruises past the boat in a huge flying-V. 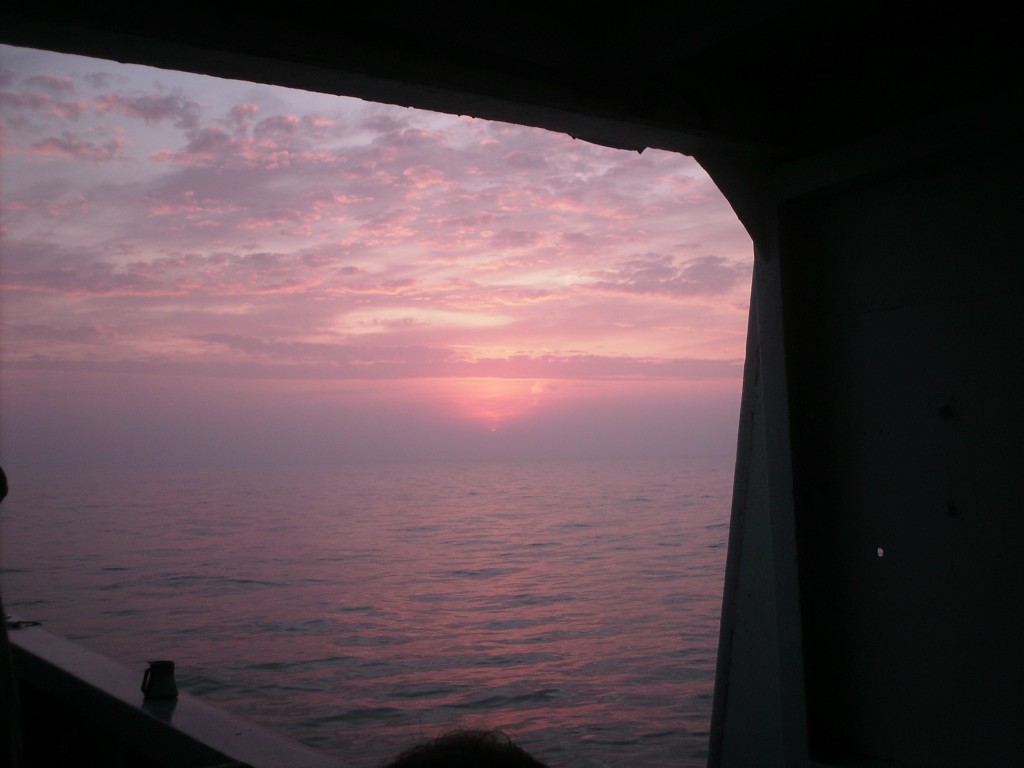 Sunrise after the night out on Tom's boat. And thus ends another dogfishing trip.

I never spotted any great whites, but we did manage to tag nearly all the dogfish we needed, and have all the acoustic transmitters out.  I hope you’ve enjoyed this latest field work recap.  I’ll be hitting the road for the entire first half of July, visiting the Hot Girlfriend, hitting up JMIH/AES, and then a little vacation.  Posting may be sporadic, but then again I’ve always been more about quality than quantity.  Do stick around.