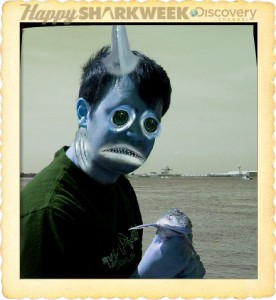 As you may have noticed, a little thing called Shark Week was on TV this week.  It’s long been something of a Super Bowl for shark fans, and has more recently become a pop culture phenomenon.  It can be said that with the increasing popularity of Shark Week the quality has gone down, and some years it’s hard to dispute that.  As a kid, my first exposure to shark conservation came from Shark Week specials, but then the disastrous, attack-filled 2009 season had some shark researchers, conservationists, and fans calling for a boycott.  As Shark Week continues to grow, did this year’s lineup use that reach to actually teach TV viewers something about these animals, or did it sink to new depths in an effort to appeal to the lowest common denominator?  Both, actually.

I usually try to catch as much of Shark Week as a I can, though I tend to tune out on the inevitable show that rehashes the most gruesome attacks happened in the past couple years.  I watch these as both a shark researcher and someone who wants to be entertained, so I’ll try to review each new episode as such.  I’ll give each a letter grade and then average it out for the entire week, and we’ll see how Shark Week did in 2011.

Showing Chris Fallows with jumping great whites has been a Shark Week tradition since the first Air Jaws in 2001.  Though at this point it’s gotten somewhat repetitive basing an entire documentary on great whites jumping, the visual is still awesome.  This year Fallows and other researchers follow great whites as they head close inshore and try to figure out why large sharks would spend so much time in waist-deep water.  It’s debatable whether this is a “new” behavior and at some points the danger factor is played up, but overall this is a pretty solid documentary on some interesting behavior.  B+

I may not be able to be totally unbiased about this one, since the white sharks of New England are a minor obsession of mine.  That said, this was one of the high points of this year’s lineup.  I’ve met Greg Skomal, and his personality and enthusiasm for his work really show through on this documentary.  It also does a good job of realistically showing how a beach community reacts to the sudden and apparently now regular appearance of “Jaws” in the area.  No hysteria, just big sharks and Massachusetts accents.  A

At first this seemed like it was going to be more “Shark Porn,” but actually manages to sneak a fair amount of science in there.  It starts and ends with the oceanic whitetip attacks in Sharm-al Sheik, and in between demonstrates how science has pretty thoroughly dismantled the “rogue shark” theory.  Where it gets weird is when it talks about the Sharm-al Sheik attacks.  First off, this may be the first attack-centered Shark Week episode I’ve ever seen that doesn’t include commentary by attack guru George Burgess, the fact that his analysis is lacking is especially glaring because he was part of the team assembled to figure out what was going on at Sharm-al Sheik (and gave a great talk about it at AES this year).  Instead, Ralph Collier, no slouch in the research department himself, gives somewhat of an incomplete assessment of the Red Sea attacks that places the blame mostly on dive operators (no mention of the fact that livestock were dumped just off the beaches).  The episode does mention that some of the video is unavailable because it is still being used as evidence, so it seems as though this was put together before the whole report on Sharm-al Sheik was finished.  This may explain both the incomplete analysis and the lack of George Burgess, who may not have been allowed to talk to the media while working on a case that may have had legal implications.  Either way, it was a glaring and unexplained omission that marred an episode that was otherwise a bit better than I expected.  C+

Summer of the Shark

I’m not even going to bother putting up a video for this one because frankly it wasn’t all that memorable.  This was one of those requisite attack-centered shows that recounts a recent series of attacks, this time along the east coast of Australia.  It includes the same kind of cheesy, bloody reenactments, post-attack commentary from the victims, and lip-service to how rare shark attacks are (after all the carnage has been shown, of course).  I don’t mean to disrespect the victims or trivialize what they went through, but as a documentary this was about as standard-issue as it gets, not really teaching the audience anything and potentially harmful to shark conservation efforts.  The one positive is that it shows an attack victim from Sydney who goes on to testify at CITES in favor of shark conservation.  Otherwise, this sort of thing is getting old.  If only “Summer of the Shark” had been as bad as it got… D

I didn’t show video from “Summer of the Shark” because you wouldn’t have been able to tell it from the countless attack episodes from previous years.  I’m not showing one from “Killer Sharks” because it was so bad I don’t want to subject any part of it to anyone who hasn’t seen it.  Discovery apparently understood my point about the attack shows getting bland and responded by putting together a “dramatization” of the historic shark attacks in Durban, South Africa in the late 1950s.  This series of attacks prompted the creation of the Natal Sharks Board and simultaneously created a horrific environmental problem and a huge source of data on large sharks through the anti-shark netting strung up along the beaches.  So these attacks are significant to the history of shark/human relations.  That said, they deserve better than the treatment they got from this year’s Shark Week.  The whole thing is played off as a sort of god-awful TV movie, with occasional commentary by the attack victims and witnesses.  The acting is laughable, and absolutely none of these “South Africans” have South African accents.  They spend their time being attacked by, running from, or trying to kill stock footage of sharks.  Even from a production value point of view this thing is garbage.  Then they can’t even find room for the lip-service “but attacks aren’t all that common” declaration that even “Summer of the Shark” managed to fit in, instead opting for a take-home message of “well, there’s nothing you can do to keep sharks away.  Enjoy the beach.”  If anyone at Discovery happens to read this, you may want to reconsider the employment status of whoever green-lit this crap and left it on our collective doorstep.  A profound F

Discovery usually includes at least one special featuring one of their personalities interacting with sharks, and I’m of the opinion that these aren’t necessarily bad (Dirty Jobs and Mythbusters had fun Shark Week episodes in years past).  In this case they tapped the guys from Dual Survival, though really they don’t seem to bring much in terms of unique personality to the show (it could also be that I’ve never watched Dual Survival, so maybe I’m just not picking up on it).  They did manage to get some pretty neat footage and may be on to something interesting when they try to figure out whether individual great whites have unique hunting styles.  This type of show doesn’t rock the boat in terms of cutting-edge research or educational value, but seeing familiar faces playing with sharks just may be what invites non-shark fans into the shark world.  Nothing offensive here, and parts of this episode were pretty entertaining (though one of the tiger sharks may have gotten a little beat up).  B

This is exactly the type of show I want to see Discovery move towards with Shark Week.  “Shark City” follows two Caribbean reef sharks as they wander the titular reef looking for food.  In the process, we get to see how they interact with other members of the marine community, not just other sharks but also grouper, stingrays, and even invasive lionfish.  All the denizens of Shark City are given clever names (bonus points for naming the two apparently clumsy protagonists “Harry” and “Lloyd” and the large tiger shark “Don Vito”), personifying them for the audience.  You can actually get a sense that all these fish have genuine personalities and you definitely start to root for the Harry and Lloyd in their quest for food (and when one of them takes on “Lucifer” the lionfish, you just may cheer).  “Shark City” is a little whimsical, but it’s also a clever way to show day-to-day life on the reef, both for those on the top and those being eaten.  A+

Shark Week 2011 was a pretty solid week of shark programming.  Overall there was somewhat of an overreliance on great whites (3 of the 4 shows that weren’t about attacks mostly or entirely featured Carcharodon carcharias) but that’s to be expected when you’re trying to reel in the general public.  I see a Shark Week on the crossroads; on one side you have “Shark Porn” and on the other hand you have shows like “Shark City” that do a great job bringing people into the shark’s world and “Jaws Comes Home” that effectively show how shark research is done.  Discovery seems to have given viewers a choice this year by splitting the programming down the middle, though “Rogue Sharks” did inject a fair amount of science into what might have otherwise just been another list of attacks.  As far as host Andy Samberg goes, I actually think he was a little underutilized, showing up during small parts of “Shark City” but not really given much to do in the field (he seems to have mainly been brought aboard for the wacky promos).  Hopefully we’re still in an upward trend after that god-awful 2009 season, and that should continue as long as nothing as bad as “Killer Sharks” is put in front of us again.  I’m hopeful that the better shows in this lineup were successful enough that Discovery will realize that it’s okay to ditch the stale attack shows and actually show us how awesome the ocean can be.