During my last trip out to the field, I documented a small shark that came up in the gillnet, and identified it as a juvenile blacktip shark.  Now, after looking over the picture in better detail and consulting the literature, I’m not so sure.  I’m considering reclassifying the little guy, but I’m still not 100% on it.  Fortunately, I count shark experts and experienced fishermen among my readers, so I’d like to take this opportunity to get feedback from you (yes, you!) on whether my species ID is sound.  I want to get these kinks ironed out before I get my own dissertation project ramped up and (hopefully) start pulling up similar-looking Carcharhinids by the dozen.  Read on for the pictures and particulars…

Here’s the best picture of the shark in question: 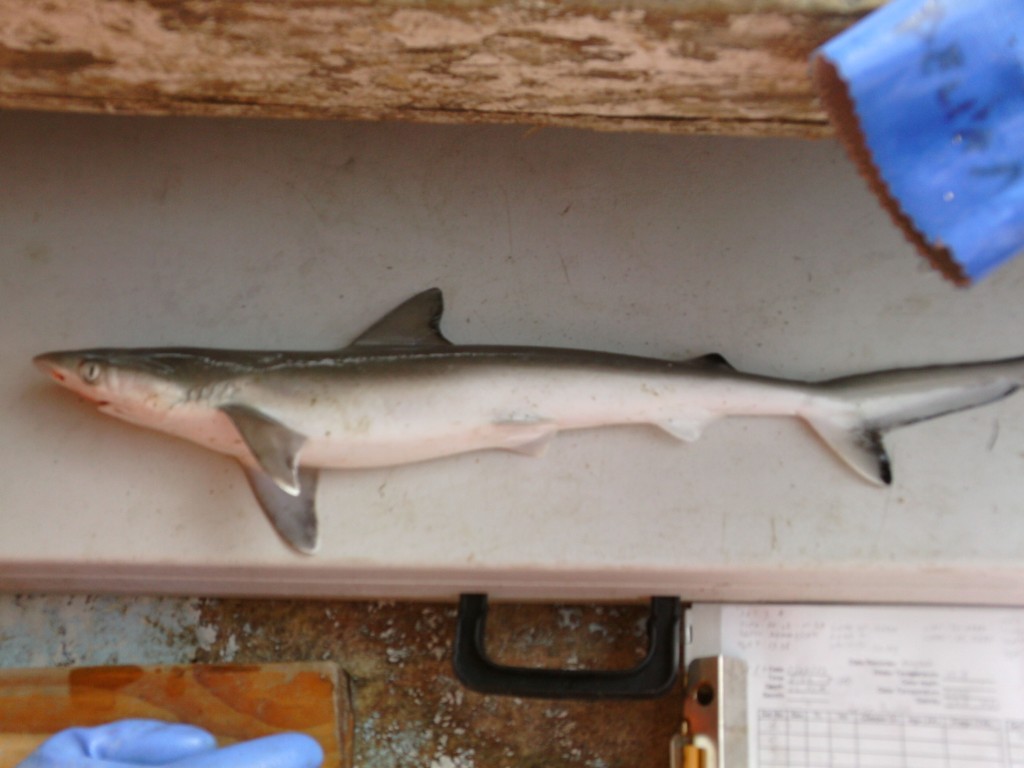 Here's my shark. Now what species is it?

This shark is fairly obviously a member of the Carcharhinidae family, the most speciose family of sharks and full of species that are distinguishable only by features as obscure as tooth shape, fin proportion, and vertebral count.  The most obvious characters on this specimen are the generally dark grey color and black margins on the dorsal fins and tail.  This shark was also rather small, coming in at 53 cm in total length (nose to end of tail).  The pectoral fins, pelvic fins, and anal fin all lack black spots, and the dorsal fin starts right at the rear margin of the pectoral fins.

There are two relatively common species in North Carolina waters that might match the description of this shark.  The blacktip shark (Carcharhinus limbatus) is regularly found at pup and juvenile sizes in local waters (albeit not usually in February).  The spinner shark (Carcharhinus brevipinna) looks very similar to the blacktip and occupies the same general range.  Complicating the ID is the fact that morphology and coloration can change as sharks grow (though usually they’re recognizable down to species).  My shark was just below the average size range for newborns of both species, but I didn’t find an umbilical scar, the usual sign of a neonatal shark.

The differences between blacktip and spinner sharks are subtle but readily apparent when you know what to look for. I purposely tried to find images of sharks close to the size of mine, and these were as close as the ones available on FishBase got.  Blacktip sharks are generally stockier than spinner sharks, with a shorter snout and a dorsal fin that starts slightly before the rear margin of the pectoral fins.  Spinners are generally more streamlined, have shorter pectoral fins, and have a dorsal fin that originates behind the rear margin of the pectoral fins.  The black tipped fins are also a giveaway; ironically, blacktip sharks often have less obvious black tips than spinners, and lack a black tip on the anal fin.  This little feature is probably the easiest way to tell the two sharks apart… when they’re adults.

Here’s where it pays to do a thorough search of the literature.  The characters that I was fretting about where supposed to be good for distinguishing adult blacktips and spinners, but my shark was clearly a very young juvenile.  Remember when I mentioned that coloration can change with age and growth?  According to The Sharks of North America (my review here), the way those problematic spots develop differs between the two species.  Blacktip sharks start with very vivid black tips that fade with age, while spinners under 70 cm in length may lack spots entirely and then darken with age.  Since my shark was definitely under 70 cm, what I should have been looking for was a lack of any black tips at all.  What I got was a shark that lacked any kind of fin spots on the lower fins and had subtle black margins on the upper fins.  Still not perfect, but now classifying the pup as a spinner made a lot more sense.

So that’s the story of how my Carcharhinus limbatus may have become a Carcharhinus brevipinna.  It also demonstrates how tough it can be to get species-specific data for some coastal shark species, and that I really need to get as much hands-on ID experience as I can before I really get going with this project.  For that reason I turn to my awesome readers, some of whom have probably gone through piles of blacktip and spinner pups.  Is my species ID sound?  Was I right the first time?  Is it something completely different?  Let me have it in the comments.

Update – Looks like the consensus is that this shark is neither a blacktip or a spinner, but a mid-sized, dark-colored Atlantic sharpnose.  Damn you, Carcharhinids!  Thanks to Bryan, Melissa, and Simon for clearing it up.  If anyone else has any horror stories about species ID, feel free to share them in the comments.