When spiny dogfish come up in conversation, it’s usually in reference to their supposedly ravenous appetites and the possibility that they’re eating other, more economically valuable species out of the ecosystem.  Luckily for the very beginnings of my research career, this has lead to a lot of interest in their feeding habits and interactions with other species.  One of the big questions involving the mighty spiny dogfish is whether they’ve been able to outcompete other predators enough to actually affect the populations of their competitors.  A new paper by Alexia Morgan and James Sulikowski attempts to answer this question by putting together models of the entire Northwest Atlantic food web.

Patterns of fishing pressure along the U.S. east coast have created a unique opportunity to conduct a “natural experiment” on the ecological role of the spiny dogfish.  In the 1990s, spiny dogfish populations were depressed by fishing pressure, then later in the 2000s populations rebounded much faster than expected.  This allowed Morgan and Sulikoski to compare the position of spiny dogfish in the food web between periods of low and recovered populations.  They did this by creating food webs of the Northwest Atlantic Ocean (basically the east coasts of the U.S. and Canada) using software called Ecopath.  This type of analysis works by adding data on the populations, feeding habits, and food consumption rates of each species to simulate the possible predator-prey interactions within that ecosystem.  The outputs organize each species (or species group for similar species like zooplankton) into nodes, with lines between the nodes representing interactions between the species.  The height of the species in the output represents their trophic level, or the “rung” of the food web they’re on.

Morgan and Sulikowski included everything between detritus and phytoplankton to large sharks and toothed whales in their models of the Northwest Atlantic.  Two different models were generated: one with the depleted population of spiny dogfish and other food web inputs from the 1990s, and one with the most current rebuilt dogfish population and food web inputs from the 2000s.  Comparing the spiny dogfish trophic level, connections with other species, and effects on other species between the models allowed the researchers to infer whether changes in the dogfish population have had wide-ranging effects on the food web. 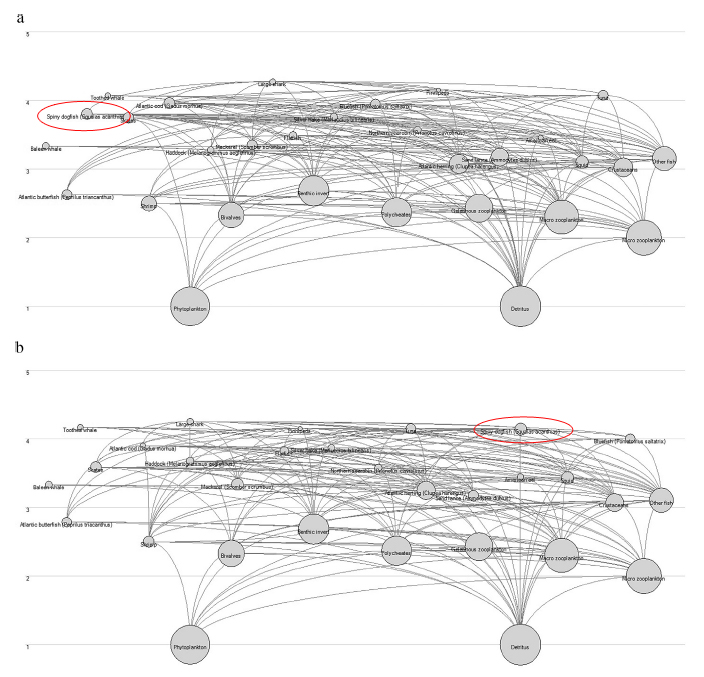 The other metrics that Morgan and Sulikowski used to assess changes in the spiny dogfish ecosystem role were measures determining whether the species had become a keystone species in the food web.  Keystone species are species that have an outsized role in the food web, and therefore have a strong influence on how other species are doing in that ecosystem.  During the depleted period, spiny dogfish had much lower measures of “keystoneness” than after their populations were rebuilt.  During both periods, the spiny dogfish diet had a high amount of overlap with other predators such as Atlantic cod, bluefish, and silver hake.

The results of the modeling analysis show that spiny dogfish have reclaimed their place within the top section of the food web and, as one of the dominant predators in the Northwest Atlantic, become a keystone species in that ecosystem.  This coincides with Atlantic cod sliding down the food web.  Marine ecosystems often have a fair amount of redundancy, so if one species in a particular ecological role is depleted (by say, overfishing), another one usually rises to take its place.  Though both Atlantic cod and spiny dogfish experienced overfishing around the same time, it seems that dogfish were more resilient and able to recover from overfishing, possibly allowing them to take up some of the food web space vacated by cod.  The usual caveats regarding this being a model and not necessarily reality apply, and the fact that dogfish and cod seem to have switched places in the food web doesn’t necessarily mean a direct interaction between the two, but the results of this paper are some of the first analytical evidence for spiny dogfish having a strong influence over the Northwest Atlantic food web.

My only problem with this paper is one sentence in the Discussion section that claims spiny dogfish consume “an astonishing 1.5 times their body weight” without actually putting it in context.  The source they cite (Brett and Blackburn 1978) found that spiny dogfish eat 1.5 times their body weight per year, which if anything is astonishingly low.  In comparison, Atlantic cod, the species they’re suspected of outcompeting, eat about 3.3-3.5 times their body weight per year, and that’s actually quite low by bony fish standards (Durbin et al. 1983).  This part of the Discussion seemed like it was unnecessarily overstating the predatory impact of spiny dogfish, especially after the rest of the paper presented some pretty solid evidence of that on its own.  Maybe I’m a little oversensitive, having done some work on spiny dogfish feeding ration myself, but I came away wondering how that sentence slipped by the reviewers.

Other than that one issue, I thought this was a very interesting paper and will certainly be referring back to it in the future.  If nothing else, it’s a good example of how models of direct interactions like predation can show evidence of indirect interactions like competition, which will be important as fishery managers continue to work towards ecosystem-based management.