Now that I’ve gotten your attention with that cringeworthy pun in the title, I’d like to put up a quick post on my overall thoughts on AES 2012 and the host city.  This took a couple days due to a cancelled flight in Philadelphia and the immediate need to get caught back up with work.  I’ll have a whole slew of tourist shots from Vancouver up as well, so you can skip my musing and look at the pretty pictures if that’s your thing. 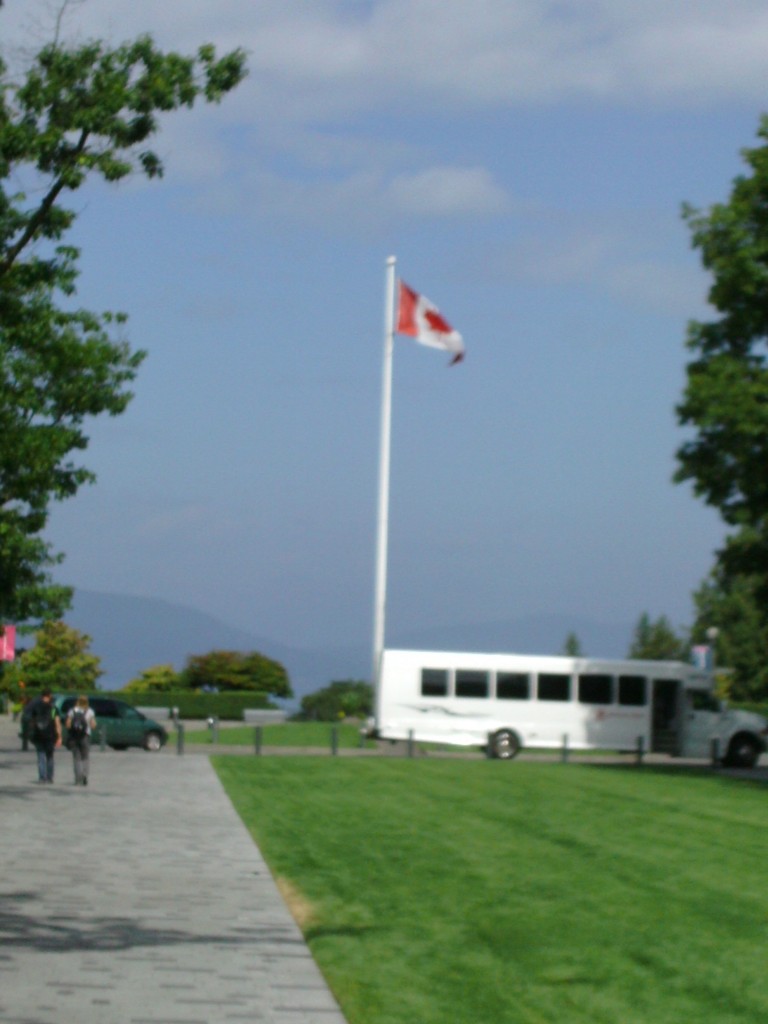 Normally, AES meets as part of the Joint Meeting of Ichthyologists and Herpetologists, a meeting that includes us awesome shark people, the American Society of Ichthyologists and Herpetologists (ASIH) and the Society for the Study of Amphibians and Reptiles (SSAR).  This year we met as part of the World Congress of Herpetology, so the snakes and frogs definitely outnumbered the sharks and the fish.  The venue was the main campus of the University of British Columbia, which takes up an almost comically huge chunk of the city of Vancouver.  UBC definitely has the largest college campus I’ve ever walked around, and I only really saw the corner immediately around where the talks were held.

AES had our own building with two concurrent sessions, and the ASIH building was right next door with several simultaneous talks going at any given time.  The herpetology talks were spread out all over the place and I never actually made it to any of those.  While it was good that there was plenty of room for presentations, this set-up also had the effect of essentially isolating all the societies, making it difficult for a shark person to run over to catch a fish talk (and good luck getting to and from any of the herpetology talks).  I’m sure the herpetologists barely noticed, since this was really their gig and we were just along for the ride, but it would have been nice to get a little more opportunity to see what the other societies are doing.  So I really just stuck around the shark building with occasional forays into the bony fish side, which ended up turning out fine since the overall quality of shark talks was extremely high and having even a mere two sessions (and several cancelled talks) meant you were always missing something cool in the next room. 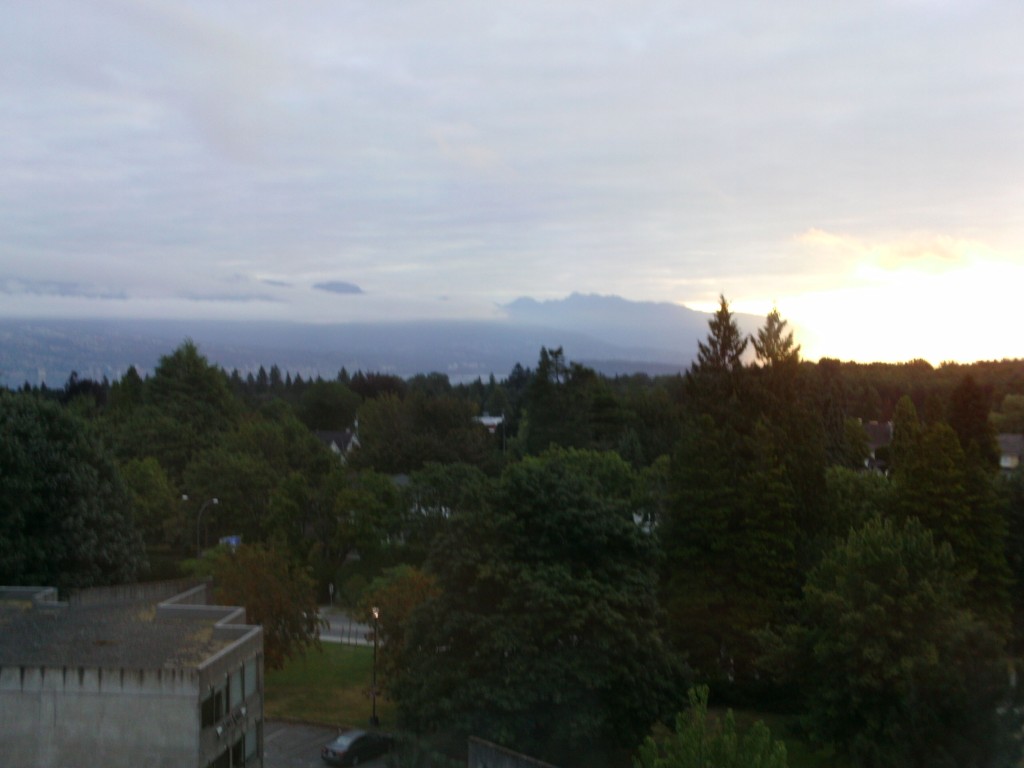 The view outside my room. Between this and the jet lag, I was incapable of sleeping in past 6:30 for the entire conference. With so much going on, it was actually not a bad problem to have. 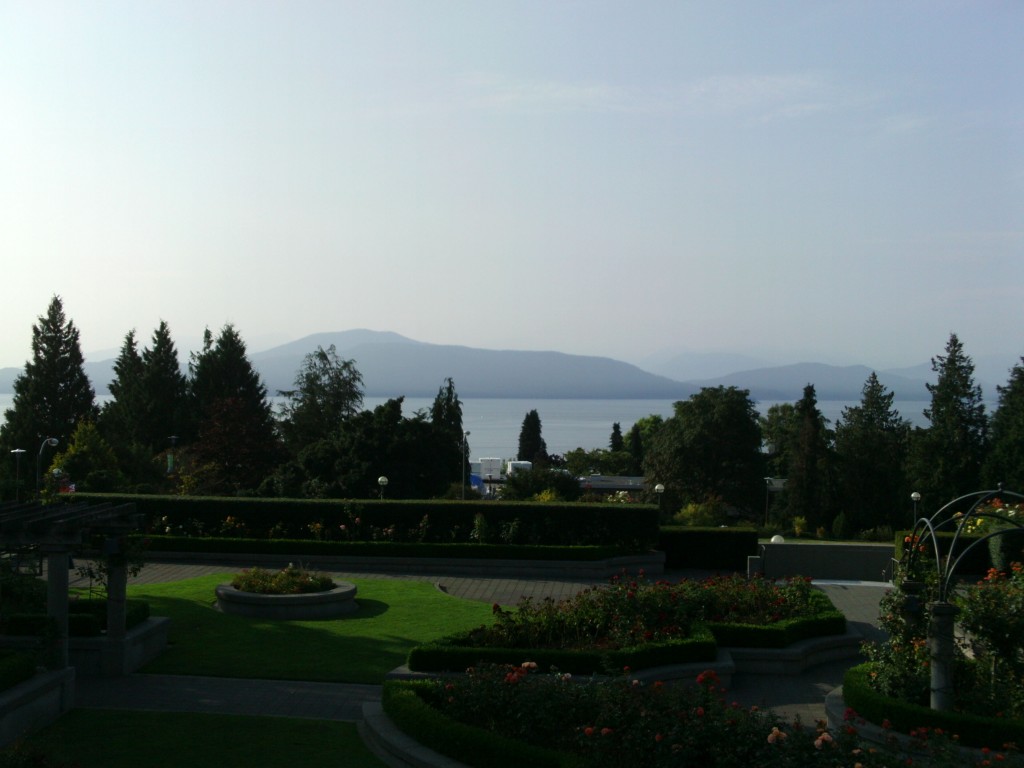 Unless you’re in an alley between buildings, there is really no angle you can turn in greater Vancouver where you can’t get a breathtaking view of the mountains, water, or some other part of the city itself. Usually it was all three. This was taken at the rose garden at UBC.

You can read my recaps and the Storify posts trickling out from David “WhySharksMatter” Shiffman for details on the talks themselves, but a few major themes seemed to emerge over the course of four days of presentations.  First, tracking is always a big deal in shark research, since we study animals that are generally large, oceanic, and highly migratory.  A number of talks focused on new innovations in the art of shark tracking and how we can do it better.  Among my favorites were Steve Kessel’s presentation on some of the more unorthodox uses of acoustic receivers and Chris Lowe’s scheme to unleash packs of shark-tracking robots into the ocean.  These talks were great for getting ideas, particularly for those of us also involved in telemetry methods (or trying to set them up).

I was pretty pleased with the Ecology and Behavior sections, since those are my main research interests.  Interestingly, a lot of the conclusions reached during these talks confirmed the observations made by those presenting in the Conservation sections.  The joint conclusion, however, is a little grim.  What we seem to be seeing when it comes to elasmobranchs is, due largely to human activity, a fading of specialists and a real surge in the generalists.  Several talks focused on the plight of specialists like sawfish and hammerheads, with Austin Gallagher’s talk really bringing behavior, ecology, and conservation together for a devastating prognosis on the fate of hammerheads.  That cool headgear and schooling behavior that we associate with these sharks are great adaptations for a world without humans, but actually make hammerheads more susceptible to fishing mortality.  On the other hand, two species really shone as examples of generalists that, despite the destruction unleashed by humanity, are actually doing quite well: the tiger shark and that ultimate generalist, the spiny dogfish.  Talks by Derek Burkholder, Mike Heithaus, and Jeremy Vaudo made the case that tiger sharks pretty much do whatever they want and it’s up to the rest of the ecosystem to deal with it.  James Sulikowski, Amy Carlson, and even my talk demonstrated the adaptability of the mighty dogfish.  Both of these species have benefited from shark conservation and management measures that have proven woefully inadequate for other sharks and rays, and seem to be doing alright coexisting with us. 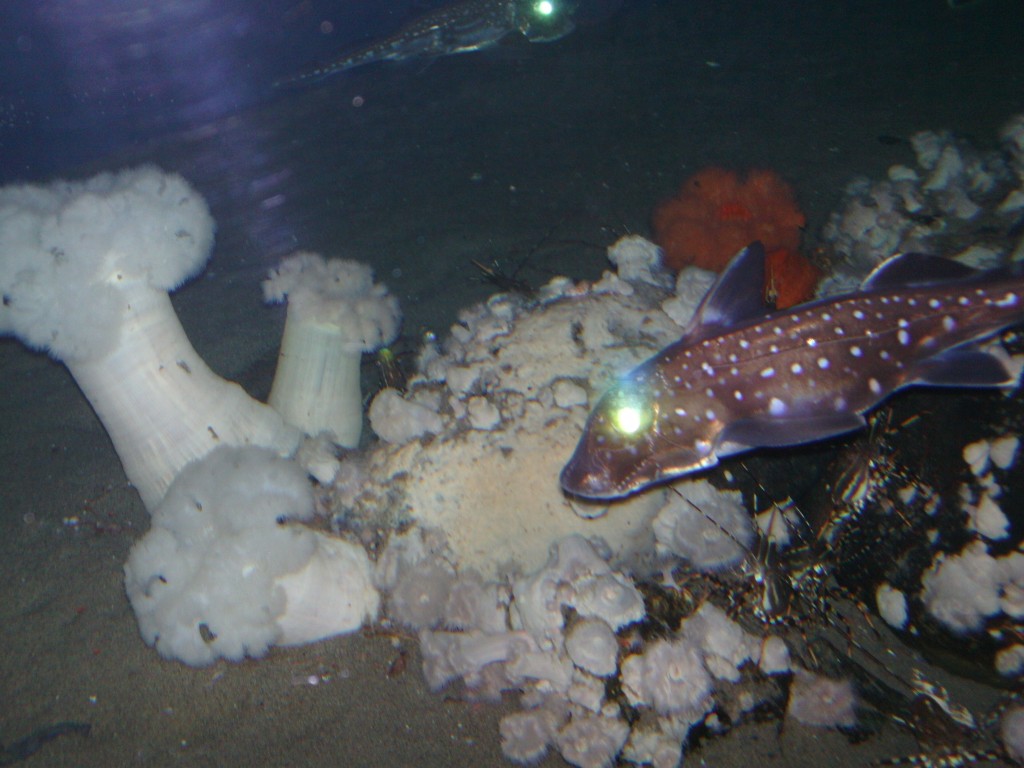 The Vancouver Aquarium features live chimeras, something you don’t see that often in aquariums. 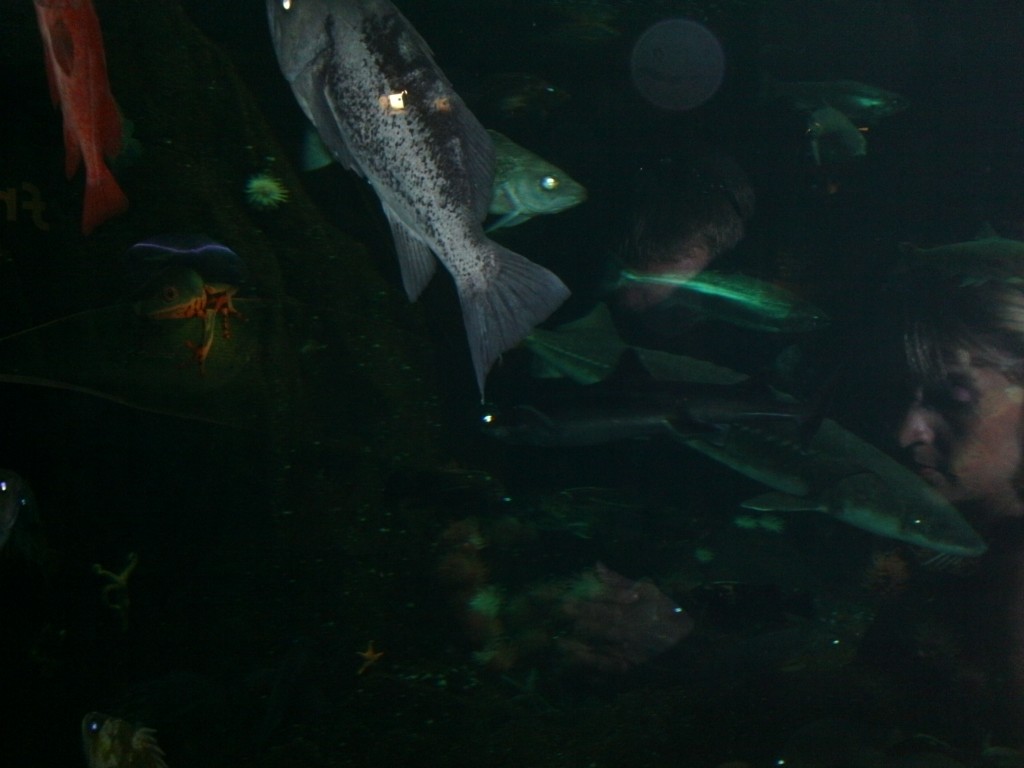 While other aquariums have a tropical reef as a centerpiece tank, the Vancouver Aquarium impresses with a huge tank full of very large fish you could find right outside the city’s harbors. That laser-eyed dark shape in the middle is a Pacific spiny dogfish. 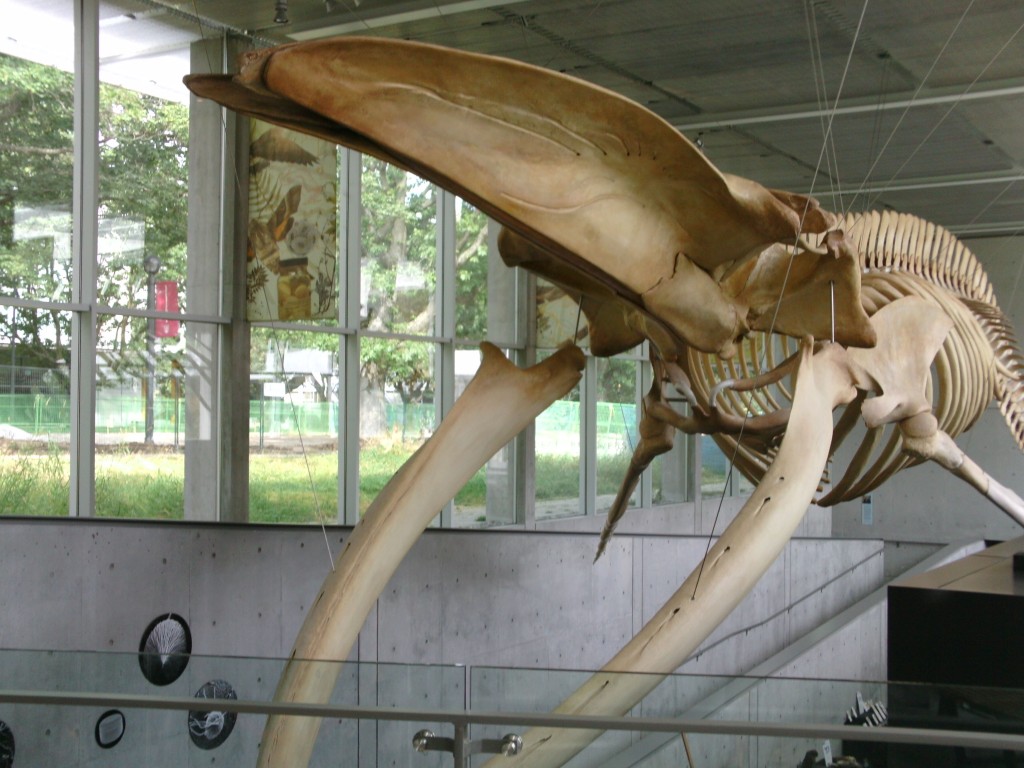 All 85 feet of the blue whale skeleton at the Beaty Biodiversity Museum.

I’ll just get this out of the way first: Vancouver is awesome.  Which actually brings me to my one major gripe about the choice of venue: it was tough to get out on the town during the conference.  The UBC campus is somewhat isolated from the rest of the city by a ring of parks and residential neighborhoods, and it takes at least 15-20 minutes on the bus to get out to Vancouver’s downtown core.  This made it tough to get out into town for lunch, dinner, or a night out while still being able to make it back, even though Vancouver’s bus system is probably the best I’ve ridden.  This had the effect of preventing the AES crowd from putting together a true, coherent night on the town and instead kind of dispersed us in smaller packs around the greater downtown area.

As a city, my only gripe about Vancouver is that some things are shockingly expensive (beer averages $6-7 a pint, and I can only imagine with horror what rent must be).  However, it was possible to find good deals, and the food was overall pretty great.  I checked out a few of the well-known neighborhoods.  Yaletown was extremely nice and most of the buildings look like they were built yesterday.  However, it’s also a bit on the trendy and expensive side for my tastes.  Gastown, which is apparently the “original” Vancouver (this is where the city spread out to take up the area it covers now) was much more up my alley, with cobblestone-lined streets and funky shops and bars that reminded me of some of my favorite areas of Boston and Providence.  If you’re a big film and TV nerd, you can probably spot familiar set pieces all over the city, and our coffee break area on campus was actually moved at one point to make room for filming an episode of Fringe. For the more biologically-nerdy (and we were at a conference of shark, fish, reptile, and amphibian scientists) the Vancouver Aquarium is well-worth checking out, with a neat focus on the local marine life of the Pacific Northwest.  The Beaty Biodiversity Museum, right on the UBC campus, is also pretty cool, particularly the 85-foot blue whale skeleton hanging from the ceiling. 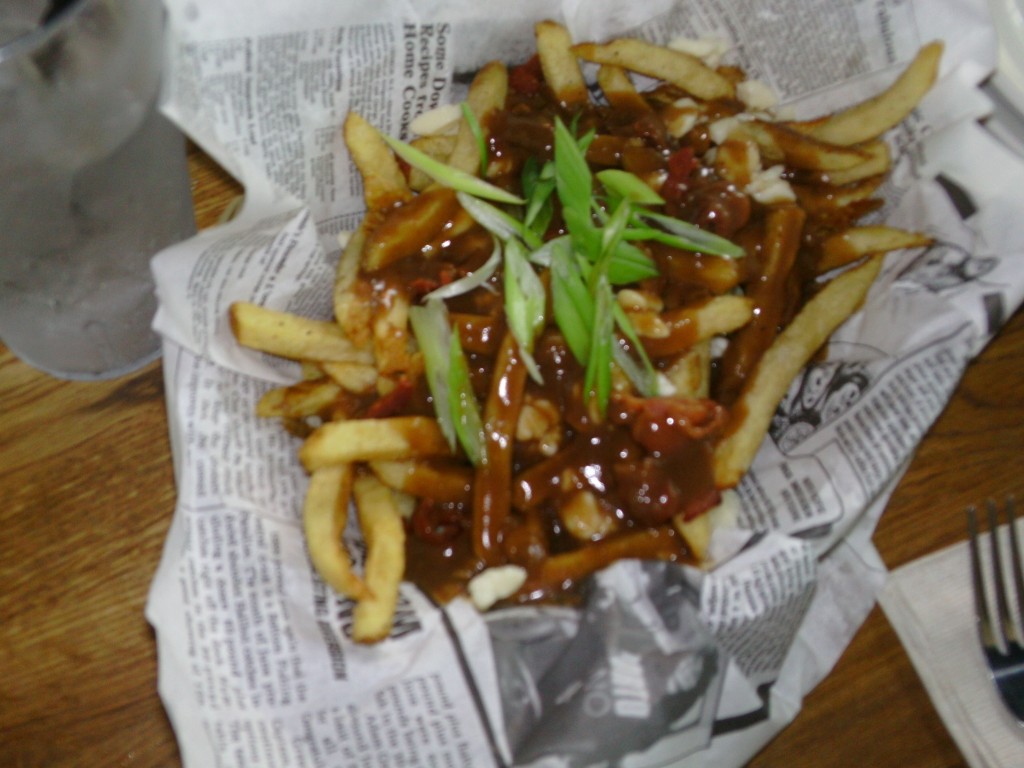 Poutine from 131 Water Kitchen and Bar. It’ll take years off your life, but damn is it tasty. 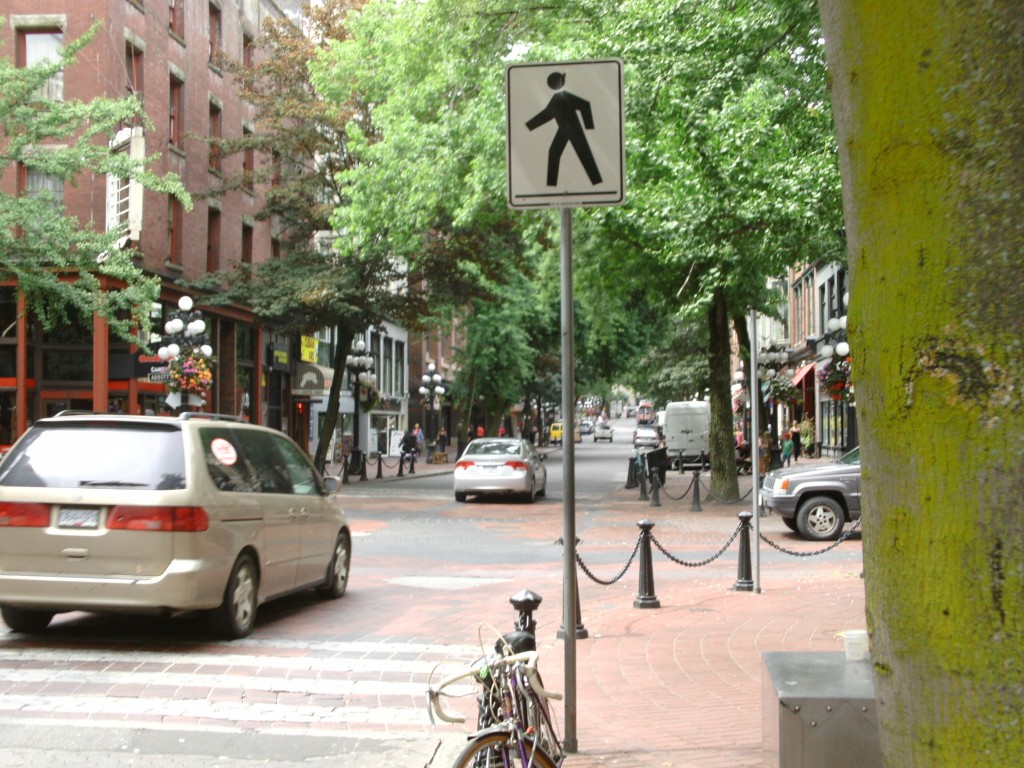 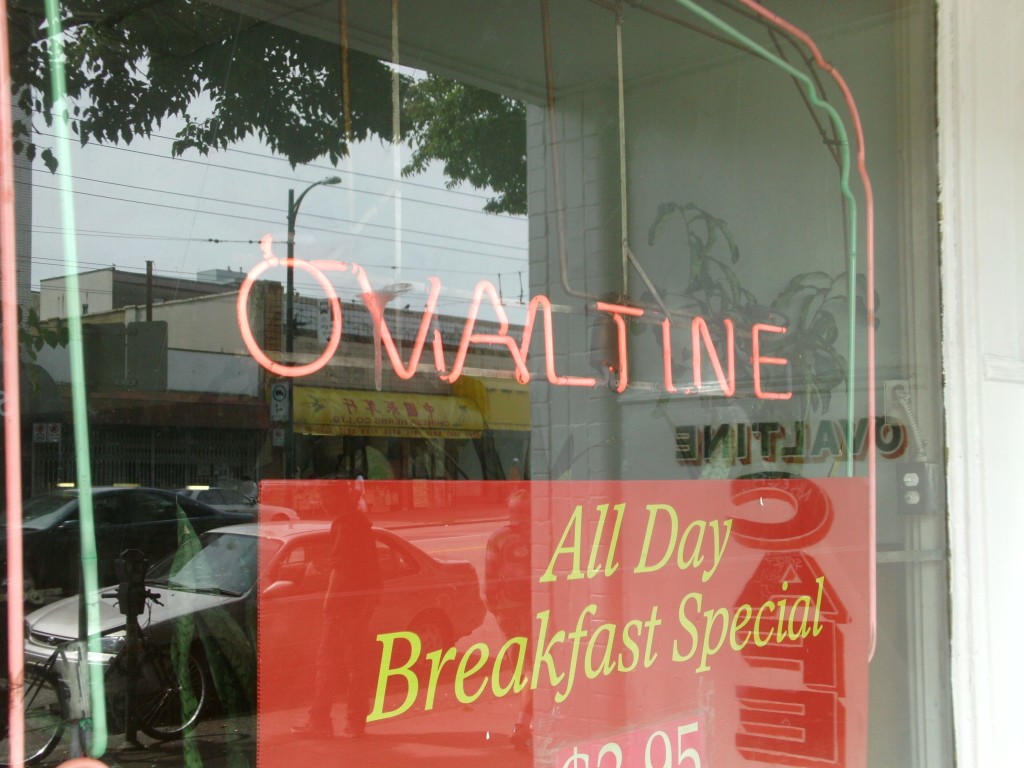 The Ovaltine Diner near China Town. This place appears in a lot of the shows filmed in Vancouver, basically any time a scene takes place in a diner or one of the characters eats a piece of pie. The pie is actually pretty good.

I also managed to explore the open-air market on Granville Island and the Kitsilano area, which wasn’t far from campus and was probably where we should have spent more time as a group.  Granville Island certainly had some character, and seems like you’re going into a different world (you literally go under a huge bridge to get there, it’s like going to Narnia).  The market included a few local seafood kiosks with plenty of huge salmon, and I came very close to taking a slab of halibut steak back with me.  Overall, I’m quite happy with my decision to stick around after the shark talks ended. 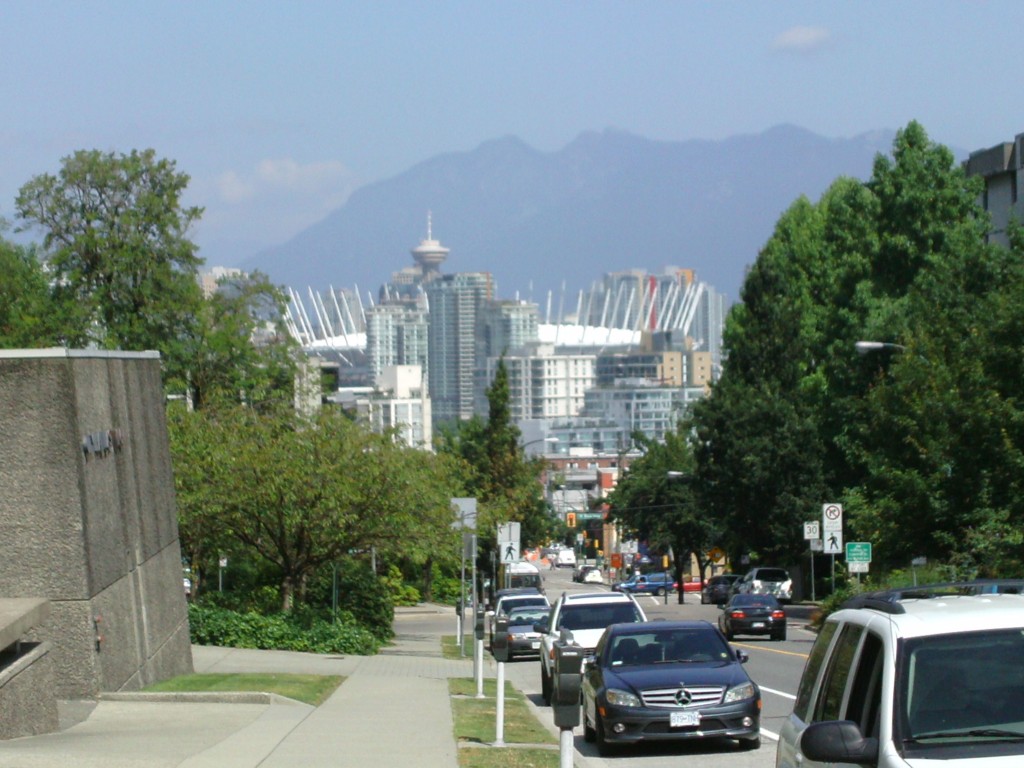 Did I mention that Vancouver is full of ridiculous views? 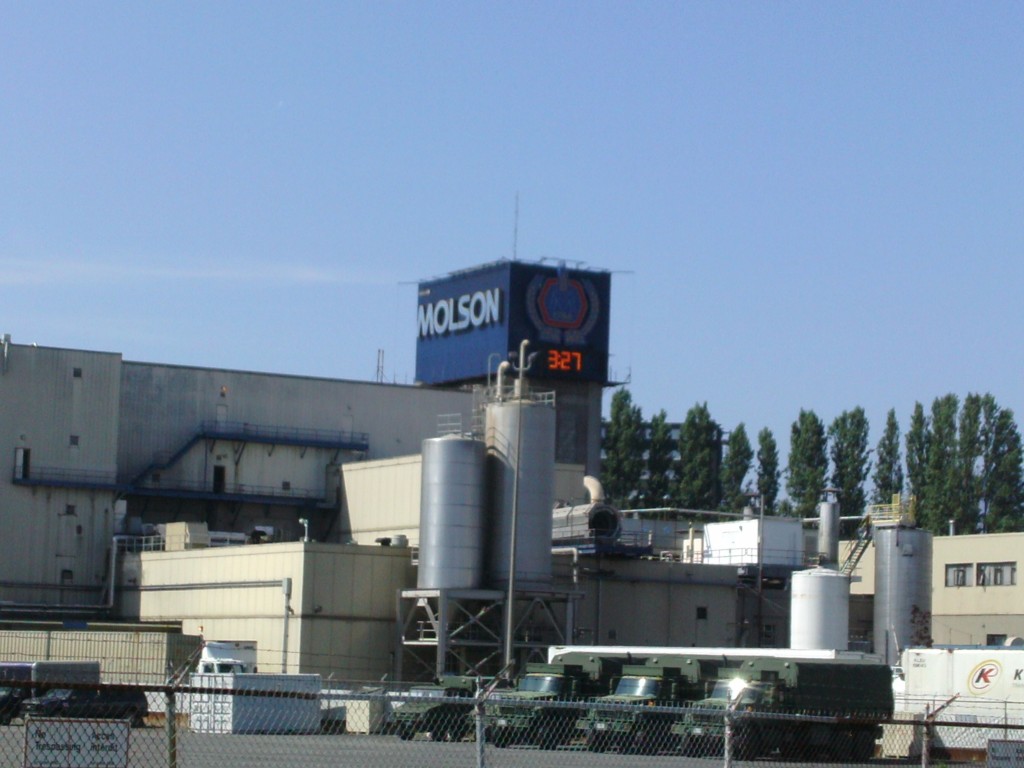 I feel like this picture is actually more Canadian than the Canadian flag at the beginning of this post. 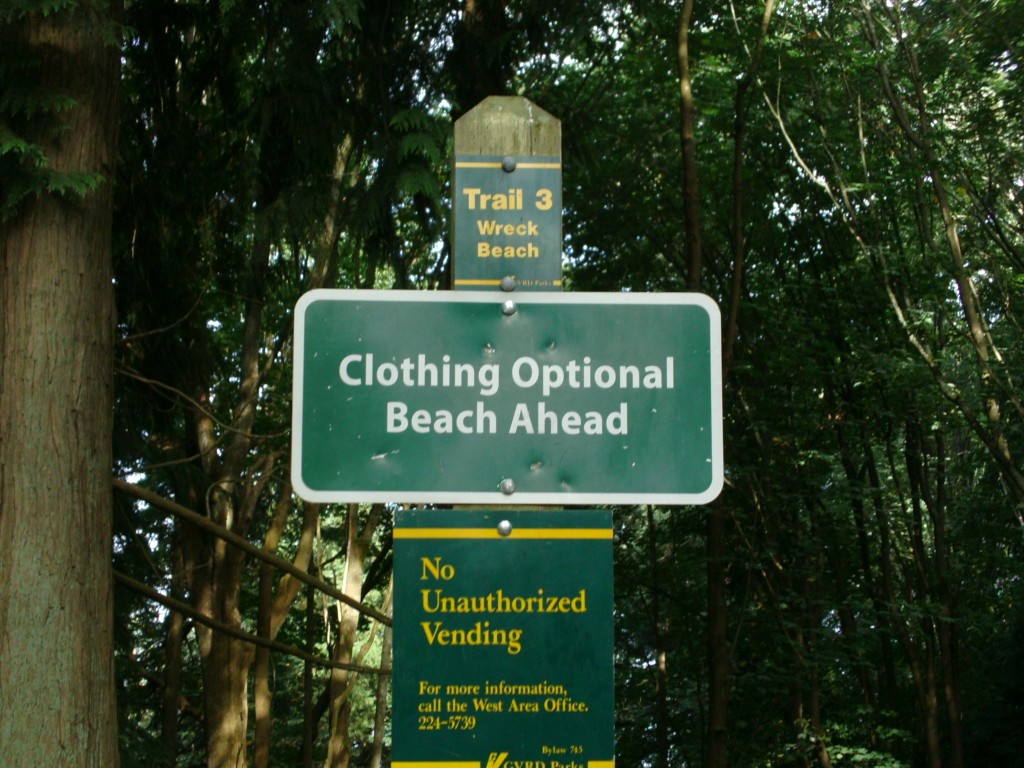 This sign is not kidding. Clothing is very optional at Wreck Beach, which surrounds the UBC campus.  It’s also surprisingly busy on weekdays.

I mentioned that when heading back from AFS in Seattle last year, I couldn’t wait to go back.  I feel that way even more strongly about Vancouver.  The city is beautiful and definitely has some character, and the people are actually, genuinely decent.  After growing up with the friendly rudeness of New England and now living in the “bless your heart” South, it was actually shocking to spend time in a place where everyone thanks the bus driver and random people recommend spots to check out just because they saw you take out a map.  There’s still a lot I want to come back and see.  Maybe once I financially recover and catch up with work from this trip, I can hit Seattle and Vancouver in the same week and truly compare the two.  Who’s with me?

As for AES, next year we’re supposed to be in Albuquerque.  Should be interesting.