A funny thing happened since the last time I posted: a paper of mine got published.  As of last week, this paper on evaluating a nonlethal way of collecting shark stomach contents has been available via Google Scholar.  Authored by myself, my advisor, and a member of my MS committee, this represents my first official publication and the first part of my dogfish work to survive the peer review process.

Because not everyone might have access to the journal (especially if you aren’t currently affiliated with a university or research institute), I tried to cram as much of the important stuff into the abstract as possible.  For the sake of brevity I had to gloss over the details regarding the methods.  With that in mind, this post will serve as a quick guide to puking a shark, and will also include some interesting “liner notes” about the study.

The basic goal of this paper was to gauge the effectiveness of a nonlethal technique for collecting shark puke.  In this case, it’s the low-tech and cheap method of stomach tube lavage, a method I’ve used fairly often.  The main take-home message?  As long as you keep the diameter of that tube within 10-20 mm of the width of the shark’s mouth, you can expect to get 90% of the stomach contents out.  This is good enough for most diet analyses that look at stomach contents, and most importantly doesn’t kill the shark.  It also helps that all you need is a section of acrylic pipe (I haven’t tried PVC, but others tell me it should work just as well) and some sandpaper to make the necessary equipment.  Nonlethal and cheap are two big advantages to this method.

To make your puke tubes, you’ll want a section of pipe long enough to get all the way into the stomach without getting your hands too close to the teeth.  The outer diameter should be within 10-20 mm of the mouth width of your target species, though you’ll probably want to make a selection of diameters in case you end up catching a variety of shark sizes.  It will probably help to do a little reading on your target species to figure these measurements out.  Also, don’t forget to sand down or bevel the edges on the end that will be going into the shark’s mouth: this will make the whole process a lot easier on both you and the shark.

Basic schematic of the lavage tube. Diameter and length will vary by whatever you’re trying to make vomit. From Bangley et al. (2013).

Once you’ve got your tubes ready, the next step is to get out there and get some sharks to puke.  This particular study was part of my Master’s work on spiny dogfish diets off of North Carolina.  The first round of sampling occurred during my time aboard the NOAA R/V Henry Bigelow, but during sampling it became clear that my largest tube was not big enough for the larger dogfish (that’s what she said?).  To correct this, I made a bigger tube and did another round of sampling during a tagging project off of Cape Cod.

Once you’ve got your sharks, it’s time to commence the puking. 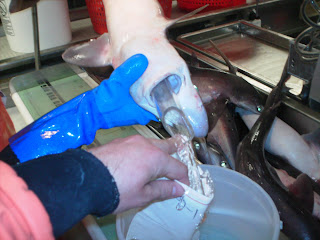 This pretty much sums up the whole method. Picture taken during sampling on the R/V Bigelow.

Here’s a step-by-step guide to the lavage process:

1 – Get the shark under control.  I accomplished this by inducing tonic immobility by holding the dogfish upside down with a hand cupped over the snout.  This pretty much puts the shark under and as a bonus most of the time it will actually open its mouth at this point.  The shark may still react occasionally, so make sure to keep a firm hand on it.  At this point it’s probably a good time to measure the mouth width (from one hinge of the jaw to the other) to determine which tube diameter you’ll be using.  Because of the necessity of handling the animal, this whole puking method is really best suited to sharks about 1.2 m (4 feet) or less in length.

2 – Insert the beveled end down the esophagus until it feels like it can’t go any further (don’t force it, remember the idea is that the shark survives this ordeal) then pull it out a little bit.  This will allow the water you flush in during the next step to get up and around the tube in case any food is trapped against the outside of the tube.

3 – Flush the tube with water.  Most ocean-going vessels have saltwater washdown hoses available that will work great for this, though in a pinch you can just dump water in from an available bucket, cup, whatever.  Filling up to about the level of the mouth worked well for me.

4 – Get a mesh bag handy (I used Hubco geological sample bags) and hold it at the end of the tube still protruding out of the shark’s mouth (it helps to have someone else to hold the bag, but can be done by yourself in a pinch).  Tilt the shark so the head and tube end are pointing down and the tube is going into the bag.  At this point you should see some stomach contents tumble out.  The mesh should filter out all the water and most of the slurry, leaving you with solid puke.  Yum.

5 – Repeat steps 3 and 4 until you get three consecutive flushes with nothing new coming out.  At this point you might also be able to look down into the tube and see if anything is stuck either inside or at the end in the stomach.  On the last flush, hold the shark facing straight down and pull the tube downward to get it out.  Sometimes I would shake the shark to help loosen any last bits.  You might be surprised how many massive chunks of prey don’t come completely out until this step.

6 – Let the shark go.  Depending on the species, it may be worth running some water over the gills before release.

Unfortunately, during my study it was necessary to cut the sharks open to determine how much food was left in the stomach post-lavage.  Sacrificed sharks were sub-sampled from the lavaged sharks, and I tried to keep the mortality down to as few as possible while still getting conclusive results.  The deaths of these sharks were not in vain: thanks to their sacrifice the efficiency of this nonlethal method can be confidently cited.  Within hours of announcing that this paper was available I had half a dozen fellow shark researchers asking for copies so they could justify using the puke method for their diet studies.  With any luck this will catch on and large-scale diet studies can be conducted without killing the sharks.  Just trying to do my part.

The effectiveness of the tube lavage method became glaringly obvious during the captive feeding study I conducted back in March.  By getting the stomach contents nonlethally, I was able to run multiple trials with the same dogfish, and not a single shark perished from the method.  The sharks involved in that study are now swimming around somewhere in the Northwest Atlantic and with any luck their contribution to science will be showing up in another published paper.

Thanks to everyone, shark or human, who made this paper possible.  If you’d like to cite it (and please do, several times), here you go: